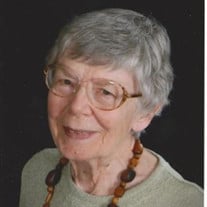 Barbara Louise Kinder Paine died Thursday, April 21, 2022, at her home in Decatur after a short illness. She was 95 years old. Barbara was born in Chicago, IL on Dec. 16, 1926, to Florence Rothman Kinder and Bern Benton Kinder. During her childhood, the family lived in Oak Park, IL, Kalamazoo, MI, and Bloomington, IL. After graduation from University High School in Normal, she attended Illinois State Normal University. There, in a biology class, Barbara met a handsome young Navy veteran from rural Greenville. She and Edward Emery Paine soon began a partnership that would last more than 75 years. She studied journalism at University of Illinois, but left to start a family. In 1966, she graduated from Millikin University and in 1974 she received a master’s degree in library science from the University of Illinois. Barbara worked at Decatur Public Library, and taught for a year at Stephen Decatur High School. She also served as librarian for public schools in Argenta, Maroa, and Cerro Gordo. She was a long-time member of the Decatur Audubon During the 1960s, she and Ed made many treks to Ed’s summer job in Crater Lake National Park in Oregon, with 4 children in tow. In later years, the couple traveled by car around the continent, from the Everglades to the Arctic Circle. They became “Winter Texans”, dancing, socializing, and birdwatching in the lower Rio Grande Valley for more than 20 years. Barbara enjoyed sewing, quilting, and other needlework crafts, and made much of her square dance apparel as well as calico stuffed animals still treasured by family and friends. She also enjoyed hosting and attending large family gatherings, where her gooseberry jam cake was legendary. She helped instill the love of books and of nature in her children, grandchildren and great-grandchildren, and deeply enjoyed watching them grow up. She is survived by husband Edward; daughter Jeanie Mendoza (Durango) of Urbana, sons Ted (Georgiana) of Decatur, Bill (Laura) of Columbus, WI, and Jeff (Linn) of Chatham, IL; 10 grandchildren; and 8 great-grandchildren. She was preceded in death by her parents, brother Thomas Kinder, and sisters Marcia Kinder Geer and Janet Diane Kinder. Contributions in Barbara’s memory can be made to the Macon County Conservation Foundation (https://www.maconcountyconservationfoundation.org/) or First Presbyterian Church of Decatur. No memorial service is planned at this time. Online condolences may be made at the Graceland Fairlawn Funeral Home web site (https://www.gracelandfairlawn.com/obituaries/).

Barbara Louise Kinder Paine died Thursday, April 21, 2022, at her home in Decatur after a short illness. She was 95 years old. Barbara was born in Chicago, IL on Dec. 16, 1926, to Florence Rothman Kinder and Bern Benton Kinder. During her childhood,... View Obituary & Service Information

The family of Barbara Louise Paine created this Life Tributes page to make it easy to share your memories.

Send flowers to the Paine family.