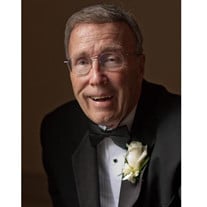 Charles J. “Chuck” Miller of Champaign (formerly of Decatur) passed away Friday morning, January 31, at Carle Hospital in Urbana with his family by his side. He was born in Mount Lebanon, Pennsylvania, on October 8, 1931, to Joseph and Clara Miller. He graduated from Duquesne University in Pittsburgh with a BS Degree in Business Administration. He then became a First Lieutenant in the US Army and served as a Company Commander. His work career took him to US Steel Company in Chicago and then to Decatur where he spent 25 years as an executive for the A.E. Staley Manufacturing Company until his retirement. In total, he lived in Decatur for 44 years where he was always an active member of Our Lady of Lourdes Catholic Church and volunteer with many local charitable organizations. In 1959, Chuck married Antonette Bellavia, who passed away in 2006 after 47 years of marriage. He is survived by their four children: Bruce Miller of St. Louis, Missouri; Patricia Espe (Matt) of Akron, Ohio; Joe Miller (Heidi) of Chicago, Illinois; and Jim Miller (Lisa) of Geneva, Illinois. They were blessed with seven grandchildren, all of whom survive him; Marisa Espe, T.K. Espe, Nick Miller, Celeste Miller, Gillian Miller, Brandt Miller and Aidan Miller. He is also survived by his twin brother, Edward (Ellen) of Richmond, Massachusetts. In 2009, Chuck married his current wife, Carole, who survives him. He enjoyed seeing new places and was able to travel extensively in that stage of his life. He is also survived by two step-children: Todd Kline of Urbana, Illinois and Kara Miller (Greg) of Oak Park, Illinois; and two step-grandchildren: Jude Miller and Harry Miller. Chuck was a loving, caring, generous and gracious Christian man with a great sense of humor. He will be deeply missed. Visitation will be from 5 p.m. to 7 p.m. Friday, February 7 at Moran Goebel Funeral Home, 2801 N. Monroe Street, Decatur. Mass of Christian Burial celebrating his life will be at 10 a.m. Saturday, February 8 at Our Lady of Lourdes Catholic Church in Decatur. In lieu of flowers, Chuck would want memorial gifts to either St Teresa High School in Decatur, Illinois; Greenville University in Greenville, Illinois; or the charity of your choosing. Moran & Goebel Funeral Home is in charge of the arrangements. Memories and condolences may be left at www.moranandgoebel.com.

Charles J. &#8220;Chuck&#8221; Miller of Champaign (formerly of Decatur) passed away Friday morning, January 31, at Carle Hospital in Urbana with his family by his side. He was born in Mount Lebanon, Pennsylvania, on October 8, 1931, to Joseph... View Obituary & Service Information

The family of Charles J. "Chuck" Miller created this Life Tributes page to make it easy to share your memories.

Send flowers to the Miller family.