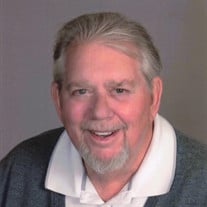 Clarence “Bud” Edward Calhoun, 77, of Forsyth, IL., died on Friday, November 26, 2021 in his home with his wife, Janet, at his side. He was born February 21, 1944, in Quincy, IL to Margaret (Gross) Calhoun and Clarence Calhoun. He met Janet Knoche in 1972, and they were married August 25, 1973 in Warsaw, IL. Bud proudly served in the U.S. Army in the 1960’s including stations in Germany and Thailand. After his military service, he attended Hannibal Lagrange College in Hannibal, MO and then earned a degree in Mechanical Engineering from the University of Illinois. After graduation he worked for Illinois Power/Ameren until his retirement in 2001. He was a member of Our Lady of Lourdes Catholic Church in Decatur. Bud loved golfing and spending time with his golf buddies. They annually took trips to golf courses in South Carolina. When Bud could no longer golf due to his battle against pulmonary fibrosis, he enjoyed watching golf and other sports on TV. He was an avid fan of the Fighting Illini and the Houston Astros. Bud enjoyed spending time with his large extended family. He is survived by the love of his life, Janet of Forsyth, IL, and his brother Lee (Cindy) Mason of Keokuk, IA along with several brothers-in-law and sisters-in-law and many nieces and nephews. He was preceded in death by his parents and three sisters. A Mass of Christian Burial will be held at 11:00 A.M. Wednesday (12-01-2021) at Our Lady of Lourdes Catholic Church, Decatur, IL with visitation one hour prior to the service. The family requests that everyone attending wear masks. Graveside services will be held at 11:00 A.M. Thursday (12-02-2021) at Oakland Cemetery in Warsaw, IL. Moran & Goebel Funeral Home are handling the funeral arrangements. In lieu of flowers, memorials may be made in Bud’s name to the following charities routinely supported by him; Wounded Warrior Foundation, St. Jude Children’s Research Hospital, Boys Town, Douglas County, NE or donor’s choice. Condolences may be left for the family at www.moranandgoebel.com.

The family of Clarence Edward Calhoun created this Life Tributes page to make it easy to share your memories.

Send flowers to the Calhoun family.