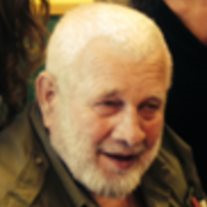 Daniel (Dan) E. Barger, 78, of Decatur passed away on Saturday, April 25, 2015 in St. John’s Hospital in Springfield. Dan was born on March 24, 1937 in Harrisburg the son of Aaron and Novella (King) Barger. He graduated from Harrisburg Township High School (IL) in the class of 1955, and then served in the US Navy from 1955-1959. He served on the USS Sarsfield (EDD 837) in Keywest, FL. After leaving the navy, he married Barbara Elam on September 26, 1961. Dan worked for F.W. Means/ARAMARK and retired with 43 years of service. In retirement Dad enjoyed sitting outside on his porch swing, reading, and talking to neighbors who happened by. He married Barbara Elam on September 26, 1961 in Harrisburg. She preceded him in death on January 3, 2011. Dad professed to know Jesus as his savior at an early age. While his life choices did not always reflect this, security of heaven is based on Jesus’ sacrifice and God’s grace. We encourage you to believe and accept that Jesus died to pay for your wrong doings, ask God’s forgiveness, and be secure in the knowledge you will go to heaven when you die (John 3:16-18). We take nothing with us when we die and we leave behind memories. Take time to make good memories with your loved ones. Surviving are his daughters, Cindy Avery (Pete) of Normal; Danette Chapman (Tom) of Decatur; sister, Patsy Chambers of Florida; aunt, Mary Malone of Rosiclare; grandchildren, Nathaniel Chapman of Decatur; Alexandra Brownfield (Tyler) of Knoxville, TN; Arthur Avery (Jessica) of Fort Campbell, KY; great-grandchildren, Madison Brownfield and Grayson Brownfield; and several nieces, nephews, and cousins. He was preceded in death by his parents, wife, Barbara; daughter, DeAnn Barger; and one niece. Graveside service celebrating Dan’s life will be 2PM Thursday, April 30, 2015 in Graceland Cemetery with military rites conducted by the Macon County Honor Guard. Memorials are suggested to God’s Shelter of Love, Decatur, IL or your local Salvation Army. The family of Daniel E. Barger is being served by Moran & Goebel Funeral Home and Cremation Services honored provider of Veterans Funeral Care, 2801 N. Monroe Street, Decatur, IL. View the online obituary, share memories, and send condolences to the family at www.moranandgoebel.com

Daniel (Dan) E. Barger, 78, of Decatur passed away on Saturday, April 25, 2015 in St. John&#8217;s Hospital in Springfield. Dan was born on March 24, 1937 in Harrisburg the son of Aaron and Novella (King) Barger. He graduated from Harrisburg... View Obituary & Service Information

The family of Daniel E. Barger created this Life Tributes page to make it easy to share your memories.