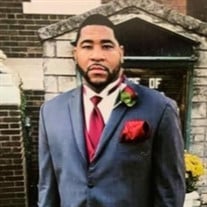 Devin L. Slater, 36, of Decatur, departed this life on Sunday, April 5th, 2020. Devin was born on July 3rd, 1983 at Brooke Army Medical Center in San Antonio, TX., the son of Emerson Burns and Lolita Love. Devin attended grammar school in Tamms, IL. He also attended Roosevelt Jr. High School as well as Eisenhower High School both in Decatur, IL. Devin obtained his G.E.D. and continued his education at MTI, where he received his Certificate of Welding, in 2014. Devin started working at R&R in 2015 as welder and was promoted to foreman for where he worked for several years. Later, Devin accepted the position as Supervisor of Maintenance at ADM. He was also a participant of Southside Sundays which was an event that was held at Muller Park. Devin was a loving and devoted father who enjoyed spending time with his children as much as possible. Devin enjoyed his time with his family and friends. Devin enjoyed being the life of the party. He was a blessing to so many and he touched so many lives, and for that, he will never be forgotten. Devin leaves to cherish his fond memories with his 7 children, Raigen Slater, daughter of Tadria, Kalanie Slater, daughter of Cierra, Devyn Slater, daughter of Maekietha, Devin Slater. Jr., son of Nicole, Camryn Slater, daughter of Carisa, Demani Slater, son of Tierra, and Caisyn Taylor, son of Virginia; parents, Emerson Burns and Lolita Love; paternal grandmother, Hazel Burns; siblings, Emerson Burns, Skyler Love, Ricko Blaylock, Aleatha Bailey, Jasmine Slater, Markus Love, Diamond Townsend, David Johnson, Keanu, Parker, Kamryn Townsend, Teresa Henry, Treasure Havoir, Torrey Burns; special friend Clara Beasley. Devin is preceded in death by maternal grandparents Bob and Emma Shaw; paternal grandfather, Emerson Burns, Sr.; aunts, Annette Gray and Pamela Burns; uncle, Calvin Burns. Homegoing services to celebrate the life of Devin Slater will be private, followed by burial at Graceland Cemetery. Memorials may be directed to the family in support of his children. The Moran & Goebel Funeral Home has been entrusted with the care of Devin. Condolences may be sent to his family at www.moranandgoebel.com http://webcast.funeralvue.com/events/login/event#29108 Password : Slater

The family of Devin L. Slater created this Life Tributes page to make it easy to share your memories.

Send flowers to the Slater family.