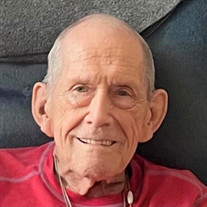 Donald L “Don” Custin, 89 of Bonita Springs, FL formally of Decatur, IL passed away at 7:33pm Saturday, January 15th at JoAnne’s House Hospice Care in Bonita Springs, FL.after a brief illness. Donald was born June 18, 1932, in Decatur, IL the youngest son of Clifford and Katherine Lucille (Skwaro). Donald married Bernadette “Bernie” (Hebda) on May 6th, 1961, in St. Patricks’ Catholic Church in Decatur, IL. She preceded him in death on February 23rd, 2021. Donald is survived by his Son Anthony P (Tony) Custin and his husband Todd Beard of Ft. Myers Beach, FL. Sisters in Law; Kathy (Hebda) Wagner of Tallahassee, FL: and Mary Ann (Hebda) Sternfels of St. Peters, Mo. Nieces; Debbie Custin, Dawn (Wagner)Roberts, Rachel (Sternfels)Orf and Nephews; Steve Custin, Joe Custin and Richard McBain, Stephen McBain, David McBain, Michael Wagner and Christopher Sternfels, His parents, brother Clifford D Custin, Sisters In-Law LaVonne Custin and JoAnne (Hebda) McBain and Brothers In-Law Dennis McBain, Robert Wagner, and Leonard Sternfels preceded him in death. Don was a lifelong resident of Decatur, IL prior to relocating to Bonita Springs, FL. He attended Gastman Grade School, Centennial Middle School and graduated from Decatur High School in 1950. He graduated from Browns Business College and began a lifelong career at Decatur Memorial Hospital (Then Decatur & Macon County Hospital) in 1952 where he held various positions in Accounting, Data Processing and Business Office before retiring in 1992 after 40 years of dedicated service. He enjoyed many years of retirement alongside his wife and enjoyed traveling and spent winters in Florida when they were able. He was a longtime member of the DMH Lodestar Club and enjoyed catching up with retired co-workers at the annual retiree’s luncheon. Don was a 3rd degree member of the Knights of Columbus, Decatur Council #577. He was an avid reader and embraced technology as he loved being on his laptop surfing the net and staying connected with family and friends on Facebook. He met his future wife Bernie while she was working at Decatur & Macon Co Hospital prior to starting her career with Illinois Bell/AT&T. Though they were 3 months shy of celebrating their 60th Anniversary, when God called Bernie home in 2021, they are now both celebrating in “Paradise” “Eternal rest grant unto them, O Lord, and let perpetual light shine upon them. May the souls of all the faithful departed, through the mercy of God, rest in Peace, amen” Mass of Christian burial will be held at 11am Monday, April 4th at St. James Catholic Church with Visitation from 10am – 11am at the church. Entombment will be next to his wife Bernadette in the Pieta Mausoleum at Graceland Cemetery following the Mass. In lieu of flowers, Memorials can be made to St. Teresa High School. The Moran and Goebel Funeral Home has been entrusted with the care of Donald. Condolences may be left to his family at www.gracelandfairlawn.com.

The family of Donald L. "Don" Custin created this Life Tributes page to make it easy to share your memories.

Send flowers to the Custin family.