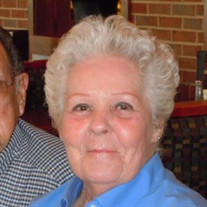 Estella Marie Sterling, 88, of Decatur, IL passed away April 1, 2020 at Fair Havens Christian Home. Estella was born June 23, 1931 in Assumption, IL, the daughter of Earl P. and Mary A. (Thurn) Bilyeu. She married Donald Sterling on August 24, 1951 in Decatur, IL. Estella and her husband had owned and operated Golden Glaze Donuts for many years. She was a member of the Elwin United Methodist Church and a member of the Order of the Eastern Star. She loved spending time with her children and grandchildren. She also loved to sing and play her organ. Surviving are her children, Dawn Mowen (Michael) of Decatur, IL, Tari Peterson of Decatur, IL, Jody Cox (Jerry ) of Lucas, TX, Lori George (Dean) of Seffner, FL; grandchildren, Brian, Donnie, Tony, Amie, Sarah, Holly, Daniel, Alycia and 16 great grandchildren. She was preceded in death by her husband, Donald; brothers, Robert E. Bilyeu, Wallace Bilyeu, Alfred Bilyeu, Donald Bilyeu, Dwayne Bilyeu and sisters, Kathryn Kirkbride, Mary Virginia Kaufman, Dorothy Brown, and Gladys Anderson. Funeral services will be private at Moran and Goebel Funeral Home. Funeral services will be streamed at funeralvue.com/login#!; user id:26887 , password: Sterling. Burial will be at Graceland Cemetery. In Lieu of flowers memorials are suggested to American Cancer Society. The family would like to give special thanks to the staff of Fair Havens Christian Village. Condolences may be left to Estella’s family at www.moranandgoebel.com.

The family of Estella Marie Sterling created this Life Tributes page to make it easy to share your memories.

Send flowers to the Sterling family.