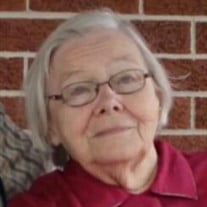 Eva Joanne (Happy) Luckenbill, 87, died peacefully on Thursday, August 20, at her home in Decatur, IL surrounded by family. She was born July 9, 1933 in Decatur to Eva J. (Young) and James E. Henson. She attended St. James Catholic Grade School, St. Teresa High School, Millikin University and St. Louis University where she earned a Bachelor of Science in Nursing. She attended University of Illinois-Springfield where she received a Master’s Degree. While at St. Teresa, Happy met Lawrence (Larry) Luckenbill. Following graduation from college she began her nursing career at St. Mary’s Hospital. When Larry completed military service, they married in St. James Catholic Church on June 23, 1956 and then moved to Peoria, IL while Larry finished college. In Peoria, Happy worked as a staff nurse at St. Francis Hospital and later as Director of Nursing at Pekin Community Hospital. While in Peoria, their sons James and Barney were born. The family returned to Decatur where Happy again worked at St. Mary’s Hospital. Later, she became a school nurse for Decatur Public School District at Roach School. In 1976, she founded and was the executive director of The High Risk Infant Registry of Macon County (Baby Love). Happy continued to operate Baby Love until she retired. Happy and Larry then moved to Cullman, AL. After he retired, they returned once again to Decatur to settle into retired life. Happy loved family and especially her grandchildren. Decatur was her hometown, and Cullman was her home away from home. She was an avid reader and loved to play Bridge. She accompanied Larry on many company trips and the two visited much of the country. She and Larry were members of three Decatur Catholic parishes; St. James, Our Lady of Lourdes and St. Thomas. In her final years, Happy suffered from a form of Dementia which eventually led to her death. While Dementia gradually took her memory, her face shown brightly when her grandchildren came to see her. She is preceded in death by her sister; Mary Lou Snelson; sister-in-law Ericka Luckenbill; sister-in-law Joanne Brunner; brother-in-law Fred Luckenbill; brother-in-law Roger Snelson; brother-in-law Lawrence Peters. She is survived by her husband Larry of 64 years. Surviving children are James L. (Terri) Luckenbill of Forsyth, IL and Barney S. (Jeanne) Luckenbill of Decatur, IL. Surviving grandchildren are Benjamin J. Luckenbill of Chestnut, IL; Matthew S. (Tatiana) of Villa Park, IL; Margaret A. Luckenbill of Decatur, IL; Patrick A. Luckenbill of Seneca, KS and Samuel J. Luckenbill of Decatur, IL. She is also survived by her sister Clara Peters; sister-in-law Nancy Luckenbill; brother-in-law Robert Luckenbill; and brother-in-law Ronald Brunner. Mass of Christian Burial will be Saturday, August 29, at 11:00 a.m. at St. Thomas Catholic Church. Visitation at St. Thomas will precede the Mass at 10:00 a.m. Burial will be in Boiling Springs Cemetery immediately following. Memorials may be made to St. Teresa Catholic High School or St. Thomas Catholic Church. The family is deeply grateful for the wonderful care Happy received from Decatur’s emergency services and healthcare professionals; in particular, the Decatur Fire Dept., Decatur Memorial Hospital and Harbor Light Hospice. The family also wishes to thank Drs’ Scott M. Bilyeu and Hima S. Atluri for their compassionate care and guidance. And finally, our thanks to St. Thomas’ faith community as well as the staff of Moran & Goebel Funeral Home for preparation of her funeral service. Condolences and memories may be shared at www.moranandgoebel.com.

The family of Eva Joanne (Happy) Luckenbill created this Life Tributes page to make it easy to share your memories.

Send flowers to the Luckenbill family.