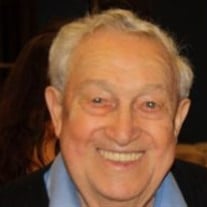 Decatur – F Paul Romano, 97, of Decatur, formerly of Sullivan, passed away December 28, 2019, at St. Mary’s Hospital, surrounded by family and friends.   Paul was born September 23, 1922, in Decatur to Rocco and Domenica Romano, immigrants from Tricarico, Italy, in 1914. He was proud of his family’s heritage and accomplishments and shared their story at every opportunity. Paul was married to Adelyn Ekiss of Decatur in 1955. Their daughter Vicki (Chuck) Schroeder, lives in Sequim, Washington. Adelyn died in 1974. He married Dorothy Freeman of Sullivan in 1986, and became a devoted stepfather to Barry (Janet) Freeman, and Larry (Janet) Freeman, and joyful grandfather to Terri (Darren) Via, and their three children. Dorothy died in 2001. Paul’s parents, brothers Antonio (Cleo), and Dominic, and sisters Mary (Lee) Frank, Rose (Harold) Oyler, and Marie (Robert) Potrafka, pre-deceased him. Paul leaves brothers Benny (Betty) and James (Barbara), both of Decatur, and sisters Frances (Jack) Richison of Austin, Tx, and Angeline (Dewey) Barr of Decatur, his daughter, stepsons, step grandchildren, and many nieces, nephews and cousins and their families, whom he remembered daily in his prayers.  Paul served in the Army Infantry in the Pacific during WWII, and was a very active lifetime member of the American Legion, Post 68, and VFW, Post 640, of Sullivan. He served his fellow veterans on the colorguard for hundreds of military funerals in Moultrie County. Paul was an avid fan of the Sullivan Redskins, Cardinals and Bears. He was a lifelong Republican and worked in politics throughout his life.  Paul was a self-employed businessman from 1947 to 1976, then retired from the State of Illinois in 1986. He was a great cook and his pizza, spit-roasted pigs, charcoal-grilled steaks, fish, and lamb fries were highly savored during his 47 years in Sullivan. Paul cherished his mother’s sayings. One saying was ‘to have a friend, be a friend.’ Paul lived by these words and built friendships far and wide. He was always ready to help others in need. After moving to Decatur to be near family in 2004, he enjoyed giving $2 bills to babies and young children for good luck wherever he went. One of his most recent requests was for more $2 bills.  The family wishes to thank St. Mary’s Hospital Compassionate Care team, and those special friends, neighbors and relatives who gave such generous support during Dad’s later years.   Mass of Christian Burial will be 10 am, Thursday, January 2, 2020, at St. Patrick Catholic Church; visitation will be one hour before in the church. Burial with military rites will be in Marrowbone Township Cemetery, Bethany. Memorials may be made to donor’s choice.  Moran & Goebel Funeral Home and Cremation Services is in charge of the arrangements. Memories and condolences may be shared at www.moranandgoebel.com.

The family of F. Paul Romano created this Life Tributes page to make it easy to share your memories.