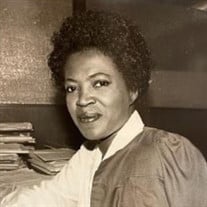 Decatur – Gloria Jean Williams, 78, went to be with ELOHIM, The Father, The Son, Jesus, and The Holy Spirit on Friday, November 19, 2021. Gloria was born on July 11, 1943, in Decatur, IL, the daughter of Nelson Jackson Odeneal and Amanda Ellree Odeneal. She married Jerry Joseph Williams in 1964. They were married approximately 9 years. She gave birth to their daughter Luvenia Kay Williams in 1965. Gloria was a loving, dedicated, nurturing, mother, full of encouragement and praise and self-sacrifice. She was a prayer warrior who over the decades prayed fervently for her daughter, her family and many others. She was truly “God’s righteous servant!” Gloria graduated from Stephen Decatur High School, attended Western University, and graduated from Augustana College. She also attended Sangamon State University. Gloria was a talented worker. At one point in her career, she received two promotions to become a Bureau of Social Services Program Planner. In 1987, ELOHIM enabled her to write a program so awesome that in her memoir’s she wrote that the federal government liked the program so much that it gave the State of Illinois over 4 million dollars to duplicate it. She often referred to these Title 20 dollars over the years. In 1987, she retired from The Bureau of Social Services after having completed putting her daughter through college. Gloria WIlliams is survived by her daughter Luvenia Kay Williams; sister Josephine Odeneal; and among many nieces and nephews, her niece Michelle Jones. She is also survived by a host of other family members she loved. She was preceded in death by her parents: Nelson and Amanda Odeneal; her sister Delores McCrory; her brothers: Nelson Pearl Odeneal, Ernest Odeneal, and Michael Odeneal. Funeral services will be 11 am, Monday, November 29, 2021, at Moran & Goebel Funeral Home; visitation will be one hour before at the funeral home. Moran & Goebel Funeral Home and Cremation Services is in charge of the arrangements. Memories and condolences may be shared at www.moranandgoebel.com.

The family of Gloria Jean Williams created this Life Tributes page to make it easy to share your memories.

Send flowers to the Williams family.