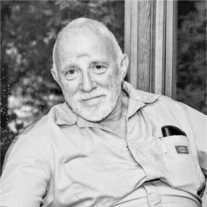 Decatur – Penning, Dr. Howard Lawrence (Larry), 82, died on September 24, 2017, in his home, surrounded by his family. Larry was born on October 20,1934 in Lincoln, Nebraska, son of Howard and Jean (Hartley) Penning. He graduated from Cathedral High School in Springfield, IL, St Joseph College in Rensselaer, IN and St. Louis University School of Medicine. On August 31, 1957, he married the love of his life, Beverly Ann Brumaster and she preceded him in death June 22, 2014. Also preceding him in death are his parents and brother, Frank. He began his medical career working for the USPHS at the Indian Health Center in Chamberlain, SD. There, he experienced the coldest winter on record, the basis for his famous all-time cold story, when the temperature failed to rise above zero for the entire month of January and the bedsheets froze to the wall of the trailer where he and Beverly lived. He spent the majority of his career (1967-1999) working as a pathologist and founding member of KMB Service Corporation at St. Mary’s Hospital in Decatur. There, he served as a medical practitioner, educator, and advocate for health, holding positions of Macon County Medical Society President, American Society of Clinical Pathologists Fellow, Director of the School of Medical Technology and adjunct faculty for numerous universities. Larry was a long-time member of Holy Family Catholic Church where he enjoyed singing with the choir and helping with daily mass. He was a man of great faith with a passion for learning and an incredible intellect — always seeking knowledge and striving to teach others. Throughout his life, he enjoyed traveling to more than 30 countries with his beloved Beverly and delighted in their Florida winters after retirement. A student of life, he enjoyed reading and researching, daily New York Times crossword puzzles, fine wine, cooking and meticulously tending to the land and gardens surrounding his home. Family was one of his greatest joys. He could often be heard relating stories of his four daughters and nine grandchildren. The oldest of eight children, Larry often served the role of patriarch and led his extended family in many ways, especially in the preservation of the family genealogy, which he successfully researched back to the 900s. Larry is survived by his daughters: Carrie Christine Penning Bush (Terry) of Champaign, IL; Michele Elizabeth Garvey (John) of Fort Mitchell, KY; Sarah Suzanne Shupenus of Decatur, IL; and Katherine Mary Penning Smith (Chris) of Monticello, IL; grandchildren: Charlotte, Caroline, Jack, Reagan, Mary, Andrew, Charlie, Lewis and Ellie; siblings: Dennis (Kieran) of Chesterton, IN; Nicholas (Mary Ann) of Arlington, VA; John (Debbie) of Springfield, IL; Matthew (Karen) of Springfield, IL; Mary Anne of Springfield, IL; Patricia [Trish] of Chatham, IL; and sister-in-law Joyce (Henry) Brumaster of Indialantic, FL. A memorial Mass will be held at Holy Family Catholic Church on Saturday, September 30, 2017, at 12 pm. The Family will receive friends and family from 10 am until the service time. In lieu of flowers, memorials can be made to Holy Family Catholic Church. The family of Dr. Howard Lawrence (Larry) Penning is being served by the Moran & Goebel Funeral Home, 2801 N. Monroe St., Decatur, IL 62526. Condolences and memories may be shared at www.moranandgoebel.com.

The family of Howard Lawrence (Larry) Penning created this Life Tributes page to make it easy to share your memories.