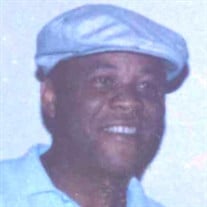 Hubert Gene (Red) Mills was born on December 20, 1943, in Brownsville, Tennessee. His parents were Jim Clark Mills and Beatrice Currie. Hubert Mills attended Haywood County Schools. At an early age, Red accepted Christ as his Lord and Savior. Red joined the Willow Grove Missionary Baptist church, under the leadership of Rev. U. L. Allen. Red began working on a farm, as a sharecropper, at an early age also. In 1962, he moved to Decatur, Illinois, where he worked at ADM, where he retired after 35 years. Before his health failed, he loved gardening, barbecuing, and being around family. Red has four sisters: Daisy Brown and Bertha Ligon of Brownsville, Tennesse, and Earline Moore and Merlyn Mills of Saginaw, Michigan. He has one brother, William Henry Mills of Peoria, Illinois. Hubert has three children: daughters Whitney Henson of Decatur, Illinois and Joyce Jackson of Los Angeles, California, and son Michael Jourdan of Decatur, Illinois. Red also has several grandchildren, along with a host of nieces, nephews, cousins, and friends. He has a devoted nephew, Elmer Moore. Red was preceded in death by his parents, three sisters, and two brothers. Funeral services will be held on Monday, April 11 at Moran and Goebel Funeral Home in Decatur. Visitation will begin at 10:00am and will be followed by a service at 11:00am. Burial will follow in Greenwood Cemetery. Condolences may be shared with the family at www.moranandgoebel.com.

The family of Hubert Gene Mills created this Life Tributes page to make it easy to share your memories.

Send flowers to the Mills family.