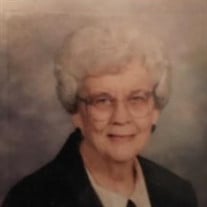 Irene M. Crotser, 99, passed away on Friday, April 8, 2022. She was born on October 15, 1922 to Matthew and Mary Jozsa in Terre Haute, Indiana. She married Eugene Crotser on June 21, 1940 in Bowling Green, Missouri. He worked for Illinois Central Railroad for 30 years and was a World War II Veteran serving in the U.S. Navy. They were members of V.F.W Post 99 and St. Thomas Catholic Church. Irene was preceded in death by her husband, Eugene Crotser; son, Daniel Crotser; grandson Brian Scott Williams as well as all of her siblings. Irene is survived by her son, Larry Crotser; daughter, Karen Taylor; grandchildren, Teri Fickes, Vicki Veech, Larry A. Crotser, Joseph Crotser, Michael Crotser, Angi Meyers, and LeAnn Terneus; 16 great-grandchildren and 13 great-great grandchildren as well as numerous extended family and friends. Irene retired from Decatur Memorial Hospital where she later served as a volunteer. She enjoyed babysitting, bowling, and playing Bunco with her friends. She was a loving grandma who was best known for hosting family gatherings and having a house full of grandchildren every weekend throughout her years. Her grandkids affectionately referred to her as “Grandma I”. She was most recently known as “Great-Great Grandma I”, as she completed five living generations until her passing. Irene was a devout Catholic who loved the Lord Jesus Christ. She was strong in her faith and her house was always a safe and welcoming place for any family member. She was a constant in the family, and you could always find her praying for those around her. A visitation will be held for Irene from 10:00-11:00 a.m. on Monday, April 18, 2022 at St. Thomas Catholic Church, with a funeral Mass following at 11:00 a.m. The burial will be held at Mt. Gilead Cemetery at a later date. Arrangements by Moran and Goebel Funeral Home 2801 N. Monroe St. Decatur, Il 62526. Condolences and memories may be shared at: https://www.moranandgoebel.com

Irene M. Crotser, 99, passed away on Friday, April 8, 2022. She was born on October 15, 1922 to Matthew and Mary Jozsa in Terre Haute, Indiana. She married Eugene Crotser on June 21, 1940 in Bowling Green, Missouri. He worked for Illinois... View Obituary & Service Information

The family of Irene Crotser created this Life Tributes page to make it easy to share your memories.

Send flowers to the Crotser family.