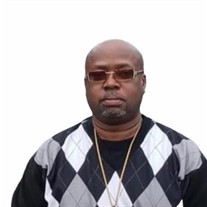 Irving Bernard &#8220;Nardo&#8221; Washington Sr., 52, of Decatur departed this life on Monday, May 3, 2021 at Decatur Memorial Hospital. Irving was born on December 2, 1968 in Darling, MS, the son of Lola Love and Benjamin Bams. He graduated... View Obituary & Service Information

The family of Irving Washington Sr. created this Life Tributes page to make it easy to share your memories.

Send flowers to the Washington family.