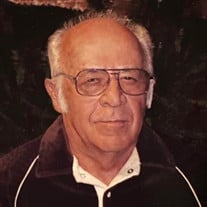 James S. Law, 90, of Mt. Zion, IL, passed away peacefully in his home on Memorial Day, May30, 2022. He was born on March 26, 1932, in Ford City, PA, the son of James and Marie (Began) Law. After graduating from Ford City High School, he serviced in the US Army, stationed in Germany. Jim moved to Mt. Zion in 1959 to work at the new PPG Plant, where he retired after 30-plus years. He married Thelma Ruth Hartman in June of 1958. Jim enjoyed camping, fishing, and deer hunting with his family and friends. He was an avid gardener. Jim and Ruth took many trips in their motorhome. He especially enjoyed winters in Arizona and traveling to Connecticut and Florida for Law family reunions. Jim is survived by his daughters Rosemary (Jack) Crissman, MaryAnn (Ted) Drake, and son Mike Law. He had 5 grandchildren that he taught to fish: Alan (Shelli) Johnston, Michael (Tiffany) Law, Teddy (Julie) Drake, Jayme Cameron, and Laurel Drake. He had 13 great-grandchildren: Chris, Quinn, Olivia, Lily, Ellie, Evie, Amber, Dimitri, Nicky, Tim, Joel, John Michael, and Alissa. He would often say “Can you believe I have 13 great-grandchildren?” He is also survived by his sisters Sally Stitt of Ford City, PA, Annette Beverly of FL, Nancy Law of Indian, PA, and many nieces and nephews. Jim was preceded in death by his wife Ruth, brothers John Law of Ford Cliff, PA, and Tom Law of CT, sister Maron Varner of Ford City, PA, brothers-in-law Paul Hartman, Ken Hartman of Mt. Zion, IL, Wendell Hartman of AZ, and his best fur buddy Binky. The family is honoring Jim’s wishes for cremation with no public services, with cremation provided by Moran and Goebel Funeral Home. He and Ruth will be laid to rest together in Macon County Memorial Park. In lieu of flowers, donations can be made to IDefine, an organization committed to identifying life-changing treatments and cures for Kleefstra Syndrome. Checks should be made to PFF, courtesy of IDefine and mailed to Players Philanthropy Fund, 1122 Kenilworth Dr., #201 Towson, MD 21204. Condolences may be shared with the family at www.moranandgoebel.com.

The family of James Smith Law created this Life Tributes page to make it easy to share your memories.

Send flowers to the Law family.