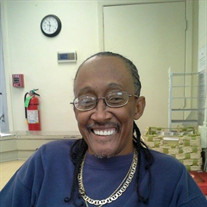 The earthly life of Mr. Jerry L. Sanders came to an end on August 8, 2020, peacefully with his brother Jimmie by his side. Mr. Jerry L. Sanders entered this life on February 5, 1959 in Brownsville, TN to the union of Jimmie Louis Sanders and Margaret (Currie) Sanders. At an early age, Jerry confessed his faith in Christ at Mercer Baptist Church. He battled Sickle Cell Disease for his entire life. He often suffered in silence from the pain of the disease, but it seemed that God did not give him more than he could bare. Jerry was a beloved person, and he never met a stranger. He was known for his unique style which included his wavy hair, long nails, and signature walking canes and eyeglasses. After graduating from Haywood High School in 1977, Jerry spent some time in St. Louis with his loving sisters and brothers before ultimately settling down in Decatur, Illinois. This too, was just like home for Jerry. He had Aunts and cousins all over the city. He worked for over 10 years at Oasis and Heritage Behavioral Health. Everyday he would help people get their lives on track by driving them to appointments, assisting them with job interview skills, and also teaching clients his favorite game of chess. He was a mentor to many people. Decatur is also the town where he discovered his mission while in the Narcotics Anonymous (NA) program. Not only did this program bring Jerry through his addictions, but it became the platform that he used to be a spokesperson for the program. He would travel all over the country telling his testimony, advocating for NA members, and most importantly, being a sponsor and helping people when they were at their lowest. Jerry was often quoted saying “Staying clean must come first and meeting makers-make it!” On September 2, he would have celebrated 16 years clean in Narcotics Anonymous! Jerry re-committed his life to Christ and joined Church of God, CWFF Temple 46. He enjoyed leading classes and being a support for members. He was just being Jerry. He offered non-judgmental support in a caring way but direct way and always with his infectious smile. It was the culmination of his life experiences with Sickle Cell, addiction, helping others at Oasis, being an active member of his church, and leading others within the NA program that made Jerry the man that God destined him to be. He was preceded in death by his parents, Jimmie and Margaret Sanders, three brothers, Perry (his twin), Tommy, and Calvinor Sanders, two sisters, Clarina Tisdale, and Margaret Sanders, and one sister-in-law, Margie Sanders. Jerry leaves to cherish his memory his sisters, Alma Morris (Neville) and Kather Cogshell (Willie James) of St. Louis, MO, his brothers, Booker T. Sanders of Brownsville, TN and Jimmie Sanders (Pearl) and brother-in-law Lonnie Tisdale, both of St. Louis, MO, and sister-in-law Mattie Sanders of Brownsville, TN. Also, deeply saddened are a host of cousins, nieces, nephews, co-workers, and friends-especially those close to him during his sickness, Mrs. Rosa, Quetta Cole, James and Norma Woodlawn, and “Punk” Singleton. Homegoing Services for Jerry will be at 12:00 Noon on Saturday, August 22, 2020 at Church of the Living God, CWFF, 400 S. Franklin St., Decatur, IL with Overseer Elston Carter officiating. Visitation will be held from 10:00 AM- 12:00 Noon on Saturday at the Church. Cremation rites will be accorded after the homegoing services. The family has entrusted Moran & Goebel Funeral Home and Cremation Services, 2801 N Monroe St, Decatur, IL with Jerry’s funeral arrangements. Please view his obituary, and share memories and condolences at www.moranandgoebel.com

The earthly life of Mr. Jerry L. Sanders came to an end on August 8, 2020, peacefully with his brother Jimmie by his side. Mr. Jerry L. Sanders entered this life on February 5, 1959 in Brownsville, TN to the union of Jimmie Louis Sanders and... View Obituary & Service Information

The family of Jerry L. Sanders created this Life Tributes page to make it easy to share your memories.

The earthly life of Mr. Jerry L. Sanders came to an end on August...

Send flowers to the Sanders family.