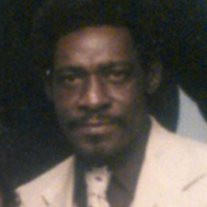 Decatur – Johnnie W. Harris (Smokey), 74, of Decatur, Illinois, departed this life on Monday, April 30, 2018, at Generation of Lincoln, Lincoln, Illinois. He is resting well now, no more pain and no more suffering. Mr. Harris was born November 22, 1943, in Jefferson City, MO, the son of Sam and Lillie B. Harris, but was raised by Frances “Lil John” Harris in Columbus, MS. Johnnie worked for Wagner Casting company for 36 years until he retired in April of 2005. He enjoyed hunting, fishing, playing pool and building bicycles from scratch by placing a horn, turn signals, headlight and brake lights, cigarette lighter, and radio to play many of his favorite blues or old school gospel songs. Johnnie was not a stranger to anyone and could tell some of the funniest stories that would have you gasping and searching for oxygen all at the same time. But most of all he enjoyed spending time with his family and his grandchildren, especially Camari and Serenity the two apples of his eyes. He leaves not to mourn, but to cherish his many memories: his wife of 39 years, Mary Frances of Decatur, IL; sons: Anthony (Laura) Harris, Kenny (Angie) Harris and Sedrick Peoples from Decatur, IL; daughters: Samantha Harris of Plano, IL, Penny Peoples of Decatur, IL and Damecia Peoples (Greg) of Kennesaw, GA; brother Willie J. (Carrie) Harris of Jacksonville, IL; special friend of over 40 years Madison Glenn of Decatur, IL; special cousin Annie P. Peoples of Columbus, MS; twelve grandchildren, eight great grandchildren and a host of nieces, nephews, and friends. He was preceded in death by his parents; first wife Anna Love; son Tommy Lamar and his brother Tommie T. A celebration of Johnnie’s life will be Friday, May 11, 2018, at Moran & Goebel Funeral Home, Decatur, IL; Rev. Joe L. Peoples officiating. Visitation will be one hour prior to the service. Burial will be in Macon County Memorial Park, Decatur, IL. The family of Johnnie W. Harris is being served by the Moran & Goebel Funeral Home, 2801 N. Monroe Street, Decatur, IL 62526. Condolences and memories may be shared at www.moranandgoebel.com.

The family of Johnnie William Harris created this Life Tributes page to make it easy to share your memories.