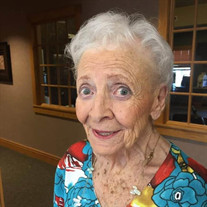 Our beloved mother, Joyce Moore is now forever dancing with the love of her life, J.C. She left us on December 28, after 96 years filled with joy and love. Lelia Joyce Martin was born November 23, 1924 to George Edward and Annie Mae (Neil) Martin in Winnipeg, Manitoba Canada. Her family immigrated to Chicago when she was three. Joyce was a music major at Millikin University in Decatur, and graduated with a teaching degree. She was a member of Pi Beta Phi Sorority, where she was President. She was also a member of Sigma Alpha Iota Music Fraternity. Upon graduation, she accepted a position teaching music in Sullivan. It is there where she met the love of her life, J.C. Moore, a very handsome teacher. They married in 1949, and had three daughters, Debbie (Chris) Olsen, Deanna (Chris) Andriano and Julie (Doug) Wolfe. In 1961, they moved to Mattoon, where Joyce taught music at Franklin Elementary School and Jefferson Junior High. She loved her family fiercely, and was an inspiration to many. She and Dad were Master Bridge players, and the most beautiful dancers since Fred Astaire and Ginger Rogers. They loved golf, and especially their Friday night golf group with friends at the Mattoon Country Club. They were members of the First Presbyterian Church for more than 50 years. She was an avid reader and loved going to the public library. Most of all, she loved J.C., and devoted her life to taking care of him. She defined “til death do us part.” She was so proud of her three daughters and gave us each every opportunity to grow. Her greatest wish was for us to be happy. She delighted in her role as Nanny to all of her wonderful grandchildren, and was amazed by her great-grandchildren. Her most favorite time of year was Christmas, and she cherished the chaos of having all of us spend the night together Christmas Eve, and waking up in the morning to the magic she and Dad created. These last few years have been hard, as Dad battled Alzheimer’s, and she fought to keep him with her. They lost most of their treasures in a massive house fire in 2013, but never lost their devotion to each other or their love for family. In recent years, mom’s strength had failed, and her memory had begun to fade. She wanted so much to have her old life back, to be in Mattoon with her friends, to go to church, the country club, and to be with the love of her life. And now she is. Joyce is survived by her three daughters, Debbie (Chris) Olsen, of Bluffton, SC., Deanna (Chris) Andriano, of Aurora, Julie (Doug) of Decatur. Her grandchildren include Matt (Jeanine) Andriano, Paige (Kevin) Toth, Lisa (Anthony) Julian, Bryce Olsen, Scott (Jenny) Andriano, Travis (Alison Kite) Wolfe, Hannah Wolfe, and Mallory Wolfe. Her great-grandchildren include Elizabeth, Anna and Kate Andriano; Henry, Sam and Jack Toth; Jimmy, Emily and Joseph Julian; Scarlett and Pearl Andriano. One granddaughter, Stacia Olsen preceded her in death. A private graveside service will be held in late January. Moran & Goebel Funeral Home in Decatur is handling arrangements. In lieu of flowers, memorials can be made to First Presbyterian Church of Mattoon, Millikin University, or the Wiesemann Women’s Center at St. Mary’s Hospital.

Our beloved mother, Joyce Moore is now forever dancing with the love of her life, J.C. She left us on December 28, after 96 years filled with joy and love. Lelia Joyce Martin was born November 23, 1924 to George Edward and Annie Mae (Neil) Martin... View Obituary & Service Information

The family of Joyce Moore created this Life Tributes page to make it easy to share your memories.

Our beloved mother, Joyce Moore is now forever dancing with the...

Send flowers to the Moore family.