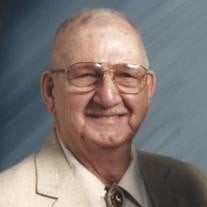 ​Kenneth O. Walker, 85, of Effingham passed away on Thursday, December 11, 2014 in his home. Ken was born July 17, 1929 in Flint, Michigan. His first job was working on the Great Lakes ships at the age of 16. He later enlisted in the service, and was a veteran of the Korean War, serving in the US Army Airforce 1946-49, Alaska National Guard 1950, and the US Navy 1950-55. Mr. Walker was a professional driver for over 45 years, retiring from Preston Trucking Company in July, 1991. He married Hester (O’Riley) Lasco on April 27, 1973. She preceded him in death on November 5, 2012. In addition to his wife, he was preceded in death by his mother, Alice (Bourne) Howlet of Oil Springs, Ont.; a daughter Sarah Cotrel of Marion, IN, a brother George Hewlette of London, Ont, and a sister Phyllis Cannon of Sarnia, Ont. Surviving are: two daughters, Patricia (Steven) Stellhorn of Indiana, and Diana (George) Saba of the Virgin Islands; four sons, Wallace K. of Equador, Kenneth A. (Sherry) of Markdale, Ontario, John W. and Mikell of Lafayette, IN; and 3 step-sons: Paul Lasco of Dayton, TX, Gene (Cindy) Lasco of LaPorte, IN, and Mitchell Lasco of Honolulu, HI. Also surviving are numerous grandchildren, and great-grandchildren. Services celebrating Kenneth’s life will be 1PM Wednesday, December 17, 2014 in Moran & Goebel Funeral Home with Pastor John Hollis officiating. Visitation will be 5-8 PM Tuesday, December 16, 2014 in the funeral home. Burial will be in Graceland Cemetery and conclude with military honors. Memorials are suggested to the donor’s choice. Pallbearers will be Jeffrey S. and Jerehme L. Walker, Eugene L. Lasco II, Paul David Lasco III, Allan Joesph Lasco, and Charles Buckingham. The family of Kenneth O. Walker is being served by Moran & Goebel Funeral and Cremation Services, 2801 Monroe St., Decatur, IL. View the online obituary and send condolences to the family at www.moranandgoebel.com.

The family of Kenneth O. Walker created this Life Tributes page to make it easy to share your memories.

​Kenneth O. Walker, 85, of Effingham passed away on Thursday,...