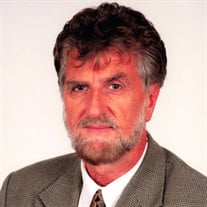 Lonnie Allen Pressnall, 79, Forsyth, Illinois, passed away at home on January 30, 2022. Lonn was born to parents Greta Rose Crandall and William Milton Pressnall on January 3, 1943, in Beatrice, Nebraska. Lonn grew up in the small town Wymore, Nebraska raised by his mother Greta and step-father Ray (Barney) Bernadt, whom Lonn cared for greatly and deeply respected. Lonn was preceded in death by his elder brother Leslie White and elder sister Merna Johnson (survived by her husband Norton). Lonn is survived by his eldest brother Wayne Pressnall (Gloria) and elder sister Lucile Ruiz, as well as his younger twin siblings John Bernadt (Gloria) and Greta Iles (Ronald). He attended Peru State College in Nebraska and then pursued graduate studies the University of Illinois at Champaign-Urbana acting in numerous plays while studying speech communication and theater. Lonn married Mary Ellis on the 1971 Spring Solstice at a joyful ceremony at The Sun Singer in Allerton Park, Monticello. He is survived by his son Lonn Pressnall (married to Cindy Pressnall) and daughter Brenda Pressnall (married to Laura O’Reilly) both from his marriage to Jane Currier. Lonn has two children with Mary Pressnall, with whom he recently celebrated his 50th wedding anniversary, son Christopher Pressnall (married to Megan Pressnall) and daughter Brownie Pressnall. He was deeply loved by his five grandchildren Nathan and Benjamin (Lonn and Cindy) and Grant, Ian and Callen (Christopher and Megan). Lonn was active in the theater wherever he was. While a professor at Illinois State University, as Director of Theatre for the Child Audience and Creative Drama. He loved children’s theater and wrote A Real Fast Caterpillar while at ISU. He directed numerous plays while a theater professor at Richland Community College. He acted and directed plays for the Theater 7 troupe in Decatur. After retiring from RCC, he parlayed his love of theater and Abraham Lincoln into portraying President Lincoln for school children. Lonn loved to play poker with family and friends, especially at the Elks Club in Decatur. He loved fishing in Canada, Florida and everywhere in between. Hunting for arrowheads and a reverence of Native American culture was but another passion as evidenced by his collection of artifacts, art and books. He loved sports and games of all sorts, especially the Fighting Illini. His favorite quote was, of course, by A. Lincoln: “Die when I may, I want it said by those that know me best, that I always plucked a thistle and planted a flower when I thought a flower might grow.” Per Lonn’s wishes, there will not be a funeral but rather a small gathering of family and friends will occur in the Spring at Allerton Park in Monticello.

The family of Lonnie Allen Pressnall created this Life Tributes page to make it easy to share your memories.

Send flowers to the Pressnall family.