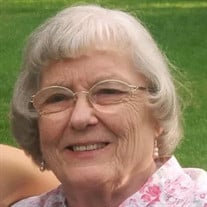 BETTENDORF, IOWA – Louanne Keck, 85, passed away on Saturday, March 14, 2020 at Clarissa Cook Hospice surrounded by her loving family. The Visitation and Funeral Mass of Christian Burial will be private. Burial will be at Boiling Springs Cemetery. Louanne was born on July 8, 1934 to Herman and Mildred (Shoemaker) Rakers. She obtained her RN from St. John’s College of Nursing and practiced as a registered nurse in obstetrics, and later in her career, in nursing homes, including the Kahl Home in Davenport, Iowa. On June 30, 1956 she married Thomas A. Keck Jr. in Decatur. Together they celebrated over 63 years of marriage. She and Tom enjoyed their retirement years by traveling to exotic locations like Hong Kong, China, Australia, Thailand, the United Kingdom, Germany, the Netherlands, New Orleans, and Las Vegas with family and friends. They also enjoyed traveling the country with their grandchildren and going on family vacations to Disney World. Louanne never missed her children and grandchildren’s sporting events, horse and dog shows and plays and concerts. Louanne is survived by her loving husband, Tom Jr., and her children, Tom (Lynn) Keck III, Dr. Karen (Dr. Sam) Joseph, Kevin (Bernadine) Keck, and Kathy Keck; her grandchildren Ryan (Shelsy) Joseph, Aaron Joseph, Kristen (Mike Pearce) Keck, Meghan (Dr. Albert) Park, Shanna (Jess) Graziani, Matt (Brooke) Keck, and Brian Keck; and her great-grandchildren Amber Joseph, Evan Joseph, Everett Park, and a great-grandchild on the way. She is also survived by numerous brothers- and sisters-in-law, cousins, and nieces and nephews. She was proceeded in death by her parents, her brother Bob, her sisters Rosemary and Cathleen, and by several brothers- and sisters-in-law, and by several nieces and nephews. The family wishes to thank the staff at Genesis Medical Center and the staff at Clarissa Cooke Hospice for their compassionate care during her last days. Memorial contributions can be made to St. John’s College of Nursing in Springfield, Illinois, Our Lady of Lourdes Catholic Church in Decatur, or to a charity of your choice.

BETTENDORF, IOWA &#8211; Louanne Keck, 85, passed away on Saturday, March 14, 2020 at Clarissa Cook Hospice surrounded by her loving family. The Visitation and Funeral Mass of Christian Burial will be private. Burial will be at Boiling Springs... View Obituary & Service Information

The family of Louanne Keck created this Life Tributes page to make it easy to share your memories.

Send flowers to the Keck family.