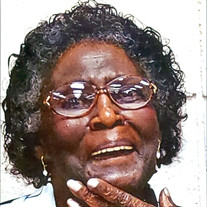 Mattie Ruth Smith, 89, of Milwaukee, Wisconsin passed away January 2, 2020 in Milwaukee. Mattie was born January 9, 1930 in Perthshire, Mississippi, the daughter of Noria and Pirllie (Spencer) Steward. She began her formal education in Perthshire and completed it in Decatur, IL. She furthered her education at Lincoln State School in Lincoln, IL where she studied Nursing Assistance. Mattie worked for the state of Illinois for 25 years at Lincoln Development Center in Lincoln, IL until she retired in 1992. Mattie Ruth Smith accepted Christ at 10 years of age and was baptized in Perthshire, MS under the leadership of Reverend Channey at Antioch Missionary Baptist Church. She later united with New Salem Missionary Baptist Church in Decatur, IL under the leadership of Reverend S.W. Hale, Sr. where she was a faithful and devoted church member. During her Christian walk, she sang in the choir, served as the Children’s Sunday School teacher, served in the Missionary Society, and President of the Mother’s Board. Mattie married Junior Patterson and they reared her brother’s son, Norman L. Coe from the age of 4. Mattie loved and diligently took care of him. She taught Norman how to fish and they both loved it. She didn’t send him to church, she took him to church. She later met and married Herman L. Smith until his passing. She leaves to cherish her fondly: her baby sister, now matriarch Jessie Lee Love, her son Norman (Rosella) Coe, three grandsons from their union: Norman Jr. (Andrea) Coe, Nathan (Naomi) Coe, Patrick Coe. One granddaughter Terra (Jacobie) Jones. Seven great- grandchildren: Norman III, Joshua, Mason, Jael, Jackson, Kennedy Coe, and Benjamin Jones. A host of cousins, nieces, nephews, family and friends. She was preceded in death by her parents, five brothers: Henry Robinson, Isiah Johntee, Noria, Louis, and Robert Steward. Four sisters, Margaret Harris, Elnora Risby, Pearl Perkins, and Essie B. Love-Parker. Homegoing Celebration will be held 11:00 AM, Saturday, January 11 at New Salem Baptist Church. Visitation will be 10:00 AM till 11:00 AM at the church. Burial will be at Greenwood Cemetery. Memorials: The Moran and Goebel Funeral Home have been entrusted with the care of Mattie. Condolences may be left to Mattie’s family at www.moranandgoebel.com.

The family of Mattie Ruth Smith created this Life Tributes page to make it easy to share your memories.

Send flowers to the Smith family.