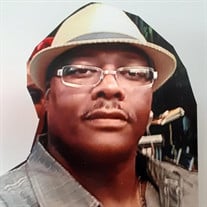 Paul Edward Green, 54, of Decatur, passed away Saturday, February 26, 2022, in his home. Paul was born in Brownsville, TN on February 28, 1967, the son of Willie and Norine (Hill) Green. Paul attended Decatur Public Schools before receiving his HCAVR Degree in Liberal Studies while attending SouthernEastern College. He worked for ADM and Caterpillar. He also owned Big Hat Productions. Paul was a faithful member of Church of the Living God, Pillar and Ground of the Truth Temple #2 under the leadership of Jefferson Smith. Paul Edward, a man that truly loved God and his family. His love for dad "pops" was untouchable and everlasting. His greatest accomplishment and joy were being a father. You never had to wonder what was on his mind because he was going to tell you what he thought! You had to have thick skin to be around him because he could roast you and make you laugh all at the same time. Paul had a hard shell on the outside but was truly a marshmallow on the inside. Also, he loved to dress for any occasion. He would often say "I am sharp as a tack." His love for hats became an obsession; he had well over one hundred hats. Paul is survived by his father Willie (Sharon) Green of Decatur; children Moneitee Green, Quinton Chaney, Kylie Green, and Eleassya Green; siblings Janet Green, Angela Green, Patricia Green, Marcus Cooper, Chaz Forest Sr., and Eric Green, all of Decatur; 4 grandchildren; five aunts; a host of nieces and nephews; and special friends Tonya, Tresea, and Kay. He was preceded in death by his mother Norine, siblings Don L, Tony, and Kim, and nephew Travis Sr. Funeral service for Paul will be held at 1pm on Saturday, March 5 at Church of the Living God, Pillar and Ground of the Truth Temple #2 (1003 W. Macon). Visitation will begin one hour before the service at the church. In honor of Big Hat, please wear a hat. Graceland/Fairlawn Crematory will provide cremation services at a later date. Condolences may be shared with the family at www.gracelandfairlawn.com.

The family of Paul Edward Green created this Life Tributes page to make it easy to share your memories.

Send flowers to the Green family.