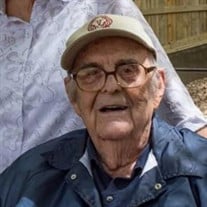 Paul Hazen Thomas, 97, died in March 2020 in Decatur, IL. He was born in 1922 in Hastings-on-Hudson, NY, to the late Dr. Franklin and Mildred Thomas, and was the youngest of seven children. He grew up at Graham School, a home and school for 250 dependent children, where his father was Executive Director. His death is not related to the Covid-19 virus. Paul attended Lafayette College (Easton PA) for two years on a baseball scholarship, after which he transferred to Beloit College in Wisconsin for his junior year. Upon joining the Marine Corps in 1942, he was stationed with the Marine Corps V-12 Unit at Oberlin College in Ohio, where he finished his college studies. During his service with the 2nd Marine Corps Division, he attended Officer Candidate School at Quantico VA and was later stationed in the South Pacific and Japan. He received a BA degree from Beloit College, Class of 1944. Paul and Joan McArthur met at Beloit College and married in 1944. They moved to Hastings-on-Hudson, NY, where he returned to Graham School as Assistant Director. During these years, he earned a Master’s degree from Columbia University, and daughters Barbara and Susan were born. In 1951, the Marine Corps called him back into service for the Korean Conflict, during which he ran the Motor Transport School at Camp Lejeune, NC. He was discharged from the Marine Corps in 1953 with the rank of Captain. Paul and Joan moved to Glenview Illinois in 1953, where Paul began a 31-year career with Sears Roebuck and Company at their headquarters. He retired in 1984 as Senior Assistant Treasurer and Stock Transfer Agent for the Company. He was a member of two stock transfer association boards and, in retirement, was an NASD arbiter, assisting in shareholder dispute resolution. Paul was an enthusiastic booster of The Village of Glenview. He served on the Glenview Plan Commission and was elected a Village Trustee in 1965. In 1967, he was appointed Village President to fill an unexpired term and was then elected Village President in 1969. He also chaired the Glenview Fire and Police Commission. He was honored to be named Glenview Citizen of the Year in 1975. Especially interested in senior housing, Paul served for many years as President of Patten House Board, President of Elderly Housing Project Board, and on the Board of Thomas Place, located on The Glen, which was named for him. He was a member of Glenview Community Church where he served as Church Moderator, member of the Board of Trustees, and on many committees. Paul loved his family, his friends, his church, Glenview, the Corps, and the Cubs. He was a wonderful, loving husband to “Joey” for 59 years, and was an even greater dad. He was a terrific baseball pitcher and would have made The Big Show had times been different. A skilled manager, he was able to direct and encourage and diffuse, as necessary. He was a dependable fundraiser, a generous giver, a humorous storyteller, and a reliable friend. He mentored many over his lifetime and the world is better for his interest and confidence in people. We are all fortunate to have been part of his good, long life. Paul is survived by daughters Barbara Thomas McNeill and Susan Thomas Morrow (Leslie); by four grandchildren Melinda McNeill Kretchmer (Zack), Megan McNeill, Rhody Morrow (Tina), and Jesse Morrow; by eleven great grandchildren and two great-great grandchildren; and by numerous nieces and nephews. He was preceded in death by his wife Joan McArthur Thomas; his parents Franklin and Mildred Marvin Thomas; and by a sister, five brothers, and their spouses: Faith Thomas Noble (Stan), Richard (Dottie; Carol), Allen (Muriel), Jimmy, Franklin, and Robert (Gloria). A memorial service is planned at a future date in Glenview IL. Contributions in his memory may be sent to The Glenview Historical Society, 1121 Waukegan Road, Glenview, IL 60025.

Paul Hazen Thomas, 97, died in March 2020 in Decatur, IL. He was born in 1922 in Hastings-on-Hudson, NY, to the late Dr. Franklin and Mildred Thomas, and was the youngest of seven children. He grew up at Graham School, a home and school for... View Obituary & Service Information

The family of Paul Thomas created this Life Tributes page to make it easy to share your memories.

Send flowers to the Thomas family.