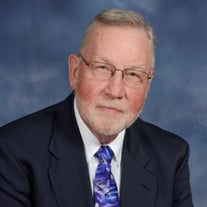 Decatur - Rev. Miley Embry Palmer, 84, of Decatur, died January 24, 2022. Miley was born March 20, 1937, in Fort Worth, Texas, the son of Guy E and Guion Palmer. He grew up in Hartford, Illinois. He graduated from McKendree University in Lebanon, Illinois, earned his master’s in theology at Garrett Evangelical Theological Seminary, and doctor of ministry degree at Christian Theological Seminary. He married Janet Elaine Kuhlmann of O’Fallon, Illinois on June 27, 1959. From 1955 until 2021, he served United Methodist congregations in Central and Southern Illinois, including Normal Calvary, Champaign Faith, Charleston Wesley, six years as Peoria District Superintendent, and nine years as directing pastor of Wesley UMC and Wesley Foundation Director at U of I. He came to Decatur as pastor of Grace UMC in 1994. He retired as a full-time pastor in 1998. After retiring he became a full-time chaplain at Decatur Memorial Hospital, where he also served for 20 years on the Institutional Review Board and Medical Ethics Committee. He was involved in interfaith activities and enjoyed preaching across denominations from Unitarian to Roman Catholic. In retirement he served interim pastorates in seven churches, both United Methodist and Presbyterian. He most recently served as Minister of Visitation for First UMC, fully retiring on December 31, 2021. Miley was the first recipient of the Peter Cartwright Lifetime Evangelism Award from the Illinois Great Rivers Conference of the United Methodist Church. He received the Peter Akers Award for professional success in recognition of his outstanding service and loyalty to his alma mater, McKendree University: this is the highest honor an alumnus of McKendree can receive. He served on the alumni board, including as President. He was a Trustee for 24 years, and was recently named Trustee Emeritus. Miley also served on the board of Methodist Medical Center in Peoria for thirty years. He helped guide Decatur’s Racial Taboo initiative and received the local NAACP chapter’s Joe Slaw Civil Rights Award. A Rotarian for 43 years, he was a Paul Harris Fellow and held every local leadership role in the Rotary Club. Throughout his ministry, he was particularly involved in social justice initiatives. He fought for open housing ordinances in Bloomington-Normal. He was an advocate for peace, working in draft counseling during the Vietnam War. He has been a familiar face across Central Illinois for those engaged in social actions concerning race relations, troubled youth, civil rights, drugs and gun violence. In 2017 he received the Cramer-Heurman Social Justice Award from the IGRC. Miley will be remembered not only for his service to various communities but for his dedication to his family, his keen sense of humor, superior preaching skills, and his endless empathy for all people. He is survived by his wife Janet; children Elizabeth Best (James); Mary Kay Mace (Eric); Michael (Teresa); and Patricia Wegeng (David); four grandchildren; nine great-grandchildren; two great-great grandchildren. He was preceded in death by his parents and a granddaughter, Ryanne Mace. Private burial services for the family will be January 29. A memorial service will be held at First United Methodist Church on Saturday, February 12 at 2:00 pm, preceded by visitation from 11:00 am to 2:00 pm. Due to Covid restrictions, limited seating is available for in-person worship and masks are required. Live streaming information and links can be found at decaturfirstumc.org. The family requests that in lieu of flowers, donations may be made to First United Methodist Church in Decatur or McKendree University. Moran & Goebel Funeral Home is in charge of the arrangements. Condolences and memories may be shared at www.moranandgoebel.com.

Decatur - Rev. Miley Embry Palmer, 84, of Decatur, died January 24, 2022. Miley was born March 20, 1937, in Fort Worth, Texas, the son of Guy E and Guion Palmer. He grew up in Hartford, Illinois. He graduated from McKendree University in Lebanon,... View Obituary & Service Information

The family of Rev. Miley E. Palmer created this Life Tributes page to make it easy to share your memories.

Send flowers to the Palmer family.