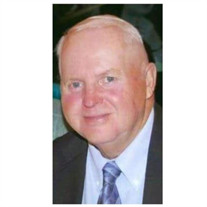 Clinton- Richard (Dick) Thomas, 82, of Clinton, passed away peacefully, at Liberty Village Clinton, IL, on Friday, September 10th, 2021. Dick was born July 7, 1939, the son of Glen and Evelyn (Owen) Thomas. A former lifetime resident of Maroa, IL, Dick was a 1958 graduate of Maroa High School. He married Patricia E. Woolums on December 27, 1959. Dick is survived by his wife of 61 years, Pat Thomas of Clinton, IL. His sister Glenda Church of Forsyth, IL. His children, daughter Jenny (Les) Day of Maroa, Son Jeff Thomas of Tampa, FL, and daughter Janet Summers (Jay Bee) of Athens, IL. He had 6 Grandchildren, and 9 Great Grandchildren. Dick was a 36 year employee of Firestone Tire and Rubber. At 59 years of age, on March 17th, 1998, Dick graduated from the University of Illinois with a Bachelor of Arts degree. Dick loved the sports of Football and Basketball. He was a lifelong fan of the Maroa-Forsyth Football Team. He loved watching the Fighting Illini Basketball team, and old Western movies. His pride and joy were his grandchildren and great grandchildren. The family will receive friends beginning at 10:30 am, Saturday, October 2, 2021, at the Maroa Christian Church where a memorial service will be held at 11 am. Private family burial will take place in Maroa Twp Cemetery. Moran & Goebel Funeral Home and Cremation Services is in charge of the arrangements. Condolences and memories may be shared at www.moranandgoebel.com.

The family of Richard O. Thomas created this Life Tributes page to make it easy to share your memories.

Send flowers to the Thomas family.