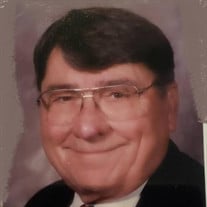 On November 25,2020 Bob Garrett passed while a patient at Decatur Memorial Hospital. Mr. Garrett was born January 13th, 1932 in Augusta, Georgia the son of Joseph Darden Garrett and Lena Mae Garrett (Smith). On August 15,1953 he married Barbara Adele Burt, in Decatur, Illinois. Barbara passed 11/19/1989. Sadly he never really stopped grieving the loss of his wife and mother of his five children. Mr. Garrett is survived by his brother Lewis Edward Garrett of Las Vegas, NV, his sister in law Nancy Petrucha of Decatur, Illinois, his five children Robert Joseph Garrett of Decatur, Illinois, Mary Colleen Garrett of Springfield, Illinois, Thomas Luther Garrett, Michael Scott Garrett, and Cheryl Kay Albert all of Decatur. He was proceeded in death by his parents Joseph and Lena Garrett, wife Barbara Garrett, brother Howard Garrett, sister Dorothy Hearn, brother Douglas Garrett, brother Joseph Garrett, brother James Garrett,. and brother in law Jerry Petrucha. Mr. Garrett took on the responsibilities of running his family farm at the young age of 13 when his father sadly passed. Helping was his brother Ed all under the guidance of his mother. At the age of 17 he joined the USAF, retiring after more than 20 years of service. He proudly served in the Korean and Vietnam Wars. During his service he was a gunner, mechanic, flight engineer, and pilot,retiring at the rank of Major. After retiring from the USAF he began a career at the Firestone tire plant in Decatur, Illinois a career lasting 25 years. He hired in as a supervisor, later becoming a foreman, and at the time of retirement the department manager of Final Finish. During his life he enjoyed time with his family, remodeling his home, fishing, golfing, woodworking, reading and reciting poetry, and volunteering.. Mr. Garrett was a Mason, Scotish Rite since 1960, a member of the Shriners, a member of the American Legion taking part in Honor Guard and serving as commander and chaplain. Mr. Garrett became a member of the Bethlehem Presbyterian Church and later became a lay minster. He enjoyed the fellowship of his church and serving God. He will be greatly missed. He was a well loved and respected man who accomplished many things in his life. But the greatest was the love he had of his family. May he rest in peace. Private graveside service will be held a Salem Cemetery, Decatur, IL. Memorials: St. Jude’s Childrens Hospital or Shriner’s Children’s Hospital. The Graceland Fairlawn Funeral Home has been entrusted with the care of Bob. Condolences may be left to his family at www.gracelandfairlawn.com.

The family of Robert E Garrett created this Life Tributes page to make it easy to share your memories.

On November 25,2020 Bob Garrett passed while a patient at Decatur...

Send flowers to the Garrett family.