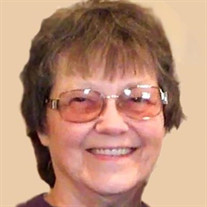 Sharon Lee Cunningham, 78, of Decatur, IL, entered into the presence of the Lord at 3:30 p.m. on Monday (01-03-2022) peacefully at home surrounded by family. Her firm belief in God supported her through her struggle with cancer and ultimately gave her peace. We are thankful she is in the arms of her husband Jack who died in 1994. Sharon was born January 29, 1943 in Decatur, IL, the daughter of Joseph Doyle and Winifred Thelma (Reed) Gipson. Her childhood was mostly in Harristown, IL. She married Jack V. Cunningham on October 5, 1962. They both became members of Oak Grove Church of the Nazarene (Decatur) in 1970. Sharon was a loving mother and homemaker. She was a remarkable cook and enjoyed preparing meals for her family and friends. She was a devoted Sunday School Teacher and mentor to her students of which she freely gave of herself for God’s work. She worked as a CNA for many years at Lincoln Manor and later at Imboden Creek Gardens where she retired at the age of 76. She is survived by her children: William H. Cunningham of Decatur, IL, Angela Y. Thompson and her husband Andrew of Lanark, IL, and her son Jack L. Cunningham of Mt. Auburn, IL. Brother Joe Gipson and wife Cathy, Sister Carol Oldham and husband Gene. Grandchildren Jake Thompson and wife Megan of Prophetstown, IL.; Brittany Harper and husband Louis of Decatur, IL.; Connor Thompson of St. Charles, MO, Lillian Cunningham of Riverton, IL, and 6 Great-grandchildren. Sharon was preceded in death by her parents, husband Jack, brothers Robert and Timothy and sister Betty. A Funeral service will be held at 11:00 A.M. on Saturday (01-15-2022) at Graceland Fairlawn Funeral Home with visitation from 10:00 A.M. until 11:00 A.M. at the funeral home. Burial will be in Harristown Cemetery, Harristown, IL. In lieu of flowers, a memorial has been established in her name. Condolences may be sent to Sharon’s family at www.moranandgoebel.com

Sharon Lee Cunningham, 78, of Decatur, IL, entered into the presence of the Lord at 3:30 p.m. on Monday (01-03-2022) peacefully at home surrounded by family. Her firm belief in God supported her through her struggle with cancer and ultimately... View Obituary & Service Information

The family of Sharon Lee Cunningham created this Life Tributes page to make it easy to share your memories.

Sharon Lee Cunningham, 78, of Decatur, IL, entered into the presence...

Send flowers to the Cunningham family.