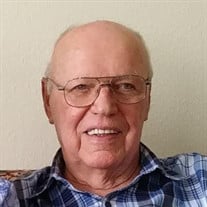 Thomas A. Keck, Jr., 87, passed away on Friday, December 4, 2020 at Clarissa Cook Hospice House, surrounded by his children. Visitation will be at 1:00 pm. on Friday, December 11, 2020 at Our Lady of Lourdes Catholic Church in Decatur. A mass of Christian burial will follow at 2:00 pm. Burial will be at Boiling Springs Cemetery. Tom was born on August 29, 1933 to Thomas and Beata (Lorenz) Keck, Sr. He served in the United States Army and was stationed in Alaska. He worked as an engineer at Caterpillar for 38 years. On June 30, 1956, he married Louanne Rakers. Together they celebrated over 63 years of marriage. They enjoyed their retirement years by traveling to exotic locations like Hong Kong, China, Australia, Thailand, the United Kingdom, Germany, the Netherlands, New Orleans, and Las Vegas with family and friends. They also enjoyed traveling the country with their children and grandchildren and going on family vacations to Disney World, Branson, Gatlinburg and Williamsburg. Tom was an accomplished woodworker, making toys and trivets on his scroll saw to give to family and friends. He was a gifted handyman who used his talents to help friends and family with renovations and repairs. He was an avid golfer and last summer he took up kayaking with his daughters. Tom is survived by his children, Tom (Lynn), Karen (Sam), Kevin (Bernadine), and Kathy, and by his grandchildren, Ryan (Shelsy), Aaron (Kellie), Kristen (Mike), Meghan (Albert), Shanna (Jess), Matt (Brooke), and Brian, and great-grandchildren Amber, Evan, Everett and Graham. He is also survived by his sisters Virginia, Sylvia, Marilyn (Tom), Cathy and Jean, and by his brothers Jim (Dorothy), Don (Peggy), Bill (Sue) and John (Deana), and by numerous nieces and nephews. He was preceded in death by his beloved wife, Louanne, his parents, sisters Betty and Carolyn and brothers Bob and Joe, and by several in-laws, nieces and nephews. Memorial contributions can be made to Clarissa Cook Hospice House in Bettendorf Iowa, St. John Vianney Catholic Church in Bettendorf Iowa, or Our Lady of Lourdes Catholic Church, or to a charity of your choice. The Moran and Goebel Funeral Home has been entrusted with the care of Thomas. Condolences may be left to his family at www.moranandgoebel.com.

Thomas A. Keck, Jr., 87, passed away on Friday, December 4, 2020 at Clarissa Cook Hospice House, surrounded by his children. Visitation will be at 1:00 pm. on Friday, December 11, 2020 at Our Lady of Lourdes Catholic Church in Decatur. A mass... View Obituary & Service Information

The family of Thomas A. Keck Jr. created this Life Tributes page to make it easy to share your memories.

Send flowers to the Keck family.