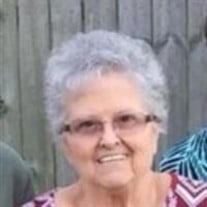 Violet Ann Ditch was born February 22, 1945 in Decatur, Illinois to Edward and Margaret Schollenbruch . She passed away on December 7, 2020 in Dallas, Texas. She was preceded in death by her husbands Charles James Ball Sr. and Jame E Ditch,... View Obituary & Service Information

The family of Violet Ann Ditch created this Life Tributes page to make it easy to share your memories.

Send flowers to the Ditch family.