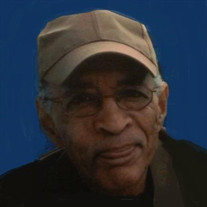 Wellington M. Wallace, Jr, 87, of Decatur, IL, passed away January 29, 2022 at Decatur Memorial Hospital. Jr, was born February 6, 1934 in Decatur, IL, the son of Wellington M. and Ruby Lee (Davis) Wallace, Sr. He married Elsie Grayned, his wife of 50 years plus, and she preceded him in death. He had worked as a grinder for Wagner Casting. He enjoyed attending Church of the Living God, Springfield, IL while his brother Charles was pastor. During his spare time, he liked to go fishing, going to the lake to watch the boats and sunsets. He had a fondness for Kentucky Fried Chicken, popcorn chicken, Heath Klondike Bars, orange slice candies and loved orange soda. He also loved spending time with his beloved dog, “Cuda”. Surviving are his daughter, Cheryl Hill of Champaign, IL; son Jeffrey L. Jones and grandsons of Woodland, CA; sister-in-law, Roberta Wallace; and a host of nieces and nephews and great nieces and nephews. He was also preceded in death by his parents, Wellington and Ruby Wallace, two infant children, one infant brother, brother, Charles Wallace and one niece. Memorial service will be 3:00 PM Saturday, February 26, 2022 at Moran and Goebel Funeral Home. Memorials: Donor’s Choice. Condolences may be left to Jr’s family at www.moranandgoebel.com.

The family of Wellington M. Wallace Jr created this Life Tributes page to make it easy to share your memories.

Send flowers to the Wallace family.