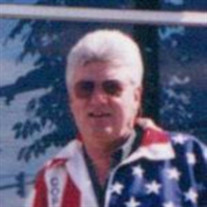 William “Bill” Price Little, of Decatur, died Saturday July 4th at Aperion Care in Jacksonville, Illinois. He was 75. Bill is survived by his wife, Kristina Edgett-Petty, his sweetheart of almost 17 years. He is also survived by two step children- Ashley Petty (Nathan Anastas), and Donovan Petty (Amber Hacker), both of Decatur. His “step dog”, Huck, was also a frequent visitor. He is also survived by his brother, Thomas Little (Cheri) of Decatur, and his sister, Josephine Mesa (Juan) of Punta Gorda, Florida. He was preceded in death by his parents, William Henry Little and Betty June Miller. Bill married the love of his life after an extensive courtship, thinking they would have many more years together. Their first date was at the Coles County Dragway in 1990. Together, they traveled to many races in many different counties and states, and their love only grew. They also were on several bowling teams together, even winning a few tournaments. Bill loved taking long rides in his many cars and visiting gambling boats to play craps with his very own “lucky charm”. Bill leaves behind many friends. He had many hobbies where he met these incredible friends, including NHRA Super Pro drag racing, bowling, golfing, tennis, and billiards. He had a passion for games and playing like there was no tomorrow. Bill was just a kid at Macon High School when the country went to war. After high school, he was an avid tennis player, and a good one. He hitchhiked all around the country in order to attend tennis tournaments. He also loved golf, and played every day for years. He attended Lincoln Junior College and Millikin University, and a few years later joined the US Air Force as an electronics fire control technician. Like so many other Vietnam veterans, doing his part and serving his country were some of his proudest moments. Upon returning home from the war, he was the Regional Sales Manager for Elaine Powers Figure Salon with territories from Idaho Falls to West Palm Beach, Florida. With his savvy salesmanship, he went on to own and operate a number of Tami Reni Figure Salons and was a successful businessman. He also went on to own his own company, Litter Gitters, established in 1973, and was the owner/operator of My Sisters Night Club, as well as Vice President and partner of Astrographics Inc. Bill proved himself to be a worthy entrepreneur and believed in giving back to his community. He donated the services of his street sweeping company to the Decatur Celebration and Gusmacker tournaments for years, and also sponsored Junior Dragsters. He donated to the NHRA, YMCA, Ursula Beck Pro Tennis Classic, and local food banks. He helped with many fundraisers, as well as always lending a helping hand to friends. Bill was a man of faith and a member of the Garver Brick United Methodist Church. He made it a point to attend church as often as he could, even when his health was starting to decline. Bill had a captivating voice, and used it to tell incredible stories and many jokes. If you knew Bill, you know his sense of humor was one of a kind and he could always make you laugh.Bill lead a very fun filled, and fulfilling, life and made friends wherever he went. He will be missed by many. Services will be held at Moran & Goebel Funeral Home on Tuesday, July 14th at 11:00 with burial at Camp Butler in Springfield on Wednesday, July 15th at 11:00. Military honors will be conducted by the Sangamon County Inter-Veteran's Detail Squad. CDC guidelines will be followed, with social distancing and requirement of masks to be worn. Services will be video streamed at funeralvue.com/login#!; user id 33000. Password is Little. Please view Bill’s obituary, and share condolences and memories at www.moranandgoebel.com

William &#8220;Bill&#8221; Price Little, of Decatur, died Saturday July 4th at Aperion Care in Jacksonville, Illinois. He was 75. Bill is survived by his wife, Kristina Edgett-Petty, his sweetheart of almost 17 years. He is also survived by... View Obituary & Service Information

The family of William Price Little created this Life Tributes page to make it easy to share your memories.

Send flowers to the Little family.