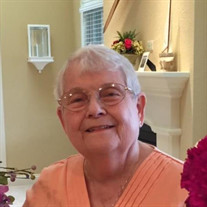 Bernadette E “Bernie” Custin, 82 of Decatur, IL passed away at 12:35pm Tuesday, February 23rd at HSHS St. Mary’s Hospital, Decatur, IL. Bernadette was born September 27, 1938 in Chicago, IL the eldest daughter of Walter Alexander and Adeline Caroline (Kwasnieski) Hebda. Bernadette married Donald (Don) Custin on May 6th, 1961 in St. Patricks’ Catholic Church in Decatur, IL. She is survived by her loving Husband of nearly 60 years Donald, their Son Anthony P (Tony) Custin and his husband Todd Beard of Ft. Myers Beach, FL. Sisters; Kathy (Hebda) Wagner of Tallahassee, FL: and Mary Ann (Hebda) Sternfels of St. Peters, Mo. Nieces; Dawn (Wagner)Roberts, Rachel (Sternfels)Orf and Debbie Custin. Nephews; Richard McBain, Stephen McBain, David McBain, Michael Wagner, Christopher Sternfels, Steve Custin and Joe Custin. Her parents, Sister JoAnne (Hebda) McBain and Brothers In-Law Dennis McBain, Robert Wagner, Leonard Sternfels and Clifford Custin. Sister In-Law LaVonne Custin preceded her in death. The family moved to Decatur in 1947 where Bernadette attended St. Thomas Grade School and graduated from St. Teresa High School in 1956. She worked briefly for ADM and Decatur & Macon Co Hospital before starting her career at Illinois Bell (eventually Ameritech and ATT) in 1957. She was the Chief Union Steward for the Communication Workers of America during the 1980’s and retired in 1989. She enjoyed many years of retirement alongside her husband and enjoyed traveling and spend winters in Florida when they were able. She also enjoyed meeting with her Operator’s Retiree Group from the Phone Company monthly and catching up with friends. She was active for many years in the Salvation Army Walkers Club where she made many lasting friendships, but most of all she was always there for her Husband. She met her future husband Don while she was working at Decatur & Macon Co Hospital. “Eternal rest grant unto them, O Lord, and let perpetual light shine upon them. May the souls of all the faithful departed, through the mercy of God, rest in Peace, Amen” Funeral Mass will be held at 11am Friday, March 19th at St. Thomas the Apostle Catholic Church with Visitation from 10am – 11am at the church. Entombment will be in the Pieta Mausoleum at Graceland Cemetery following the Mass. In lieu of flowers, Memorials can be made to St. Teresa High School. Moran and Goebel Funeral Home and Cremation Services, Decatur, IL is in charge of the arrangements. Please view her obituary and share memories and condolences at www.moranandgoebel.com

The family of Bernadette E. "Bernie" Custin created this Life Tributes page to make it easy to share your memories.

Bernadette E “Bernie” Custin, 82 of Decatur, IL passed away at...

Send flowers to the Custin family.