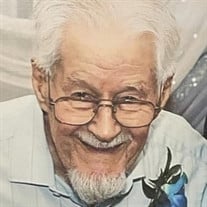 Cecil George Pilcher, 92, of Decatur, IL. passed away Thursday, January 13, 2022 in St. Mary's Hospital in Decatur from Covid complications. Cecil was born April 28, 1929 at home in Clay County near Edgewood, IL. to Claude R. and Theresa A.(Elbert) Pilcher. He married Willetta A. Schniepp on March 15, 1953 at Decatur Foursquare Church. He was a member of Hillside Bethel Ministries. As a teenager, Cecil worked summers in a peach orchard on the family farm. He was drafted into the Army from 1951-1953 during the Korean War but remained in the states. He married and began sales and installations of lightning rods for William "Bill" Schniepp. He also drove an LP gas truck and greatly increased the number of customers. In 1956 he started work at the new Decatur Caterpillar plant as a janitor and progressed through most every aspect or the operations, finally becoming a machinist and repairman in 1964. During strikes and layoffs, Cecil worked building houses, at the Moweaqua gas station, and as a mechanic for friends. Cecil and Willetta began an Amway business in 1961and achieved Direct Distributor in 1975. They built a house and moved to Decatur in 1965. He retired from Caterpillar in 1989 on his 60th birthday and began farming the family farm near Edgewood. Winters were spent volunteering in Texas at Rio Grande Bible Ministries. In 2006, Cecil and Willetta moved back to Decatur. Cecil took care of Willetta, did gardening and canning, and volunteered at his church and the church campground. After her passing he traveled some on cross country trips, one summer was a single 7000 mile trip to California, the four corners, Texas, Oklahoma, Arkansas and home again. He also went on the Veterans Honor Flight to Washington, DC in 2017. He kept busy at home and helped everyone with his many skills. He is survived (in birth order) by two daughters, Phyllis (Tom) Robertson of Decatur and Dolores (Paul) Roman of Warren, Ml; four sons, Paul (Ceal) Pilcher of Shelbyville, IL, Dan (Darla) Pilcher of Westerville, OH, Mark Pilcher of Albuquerque, NM, and Jon "JP" (Theresa) Pilcher of Decatur, IL; 21 grandchildren, 35 great-grandchildren, and 5 great-great-grandchildren. He was proceeded in death by his parents Claude and Theresa Pilcher; grandson, Jeremy Pilcher; sister, Lois Patton; wife of 61 years; Willetta; daughter-in-law, Deanna Pilcher and his brother Loren Pilcher in that order. Services celebrating the life of Cecil G Pilcher will be at 2pm Friday, January 21, 2022 at Moran & Goebel Funeral Home, 2801N. Monroe St, Decatur, IL with Pastors Kevin and Don Horath officiating. Visitation will be from noon to 2pm preceding the funeral. Burial will be in Graceland Cemetery. Memorials may be directed to Hillside Bethel Ministries, PawPrint Ministries or donor's choice. View online obituary and send Condolences to the family at www.moranandgoebel.com www.funeralvue.com/login/event#67685

The family of Cecil Pilcher created this Life Tributes page to make it easy to share your memories.

Send flowers to the Pilcher family.