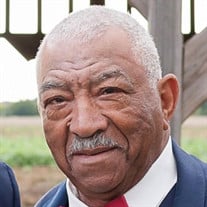 Charles Lee Wallace Sr., a born again believer, 85, slipped into eternity Tuesday night, September 21, 2021. Charles was born on August 18th, 1936 to Wellington Sr. and Ruby Wallace in Decatur, IL. Charles served his country by joining the Marine Corps in May 1954, where he received his general education diploma. Charles retired from Wagner’s Castings/Intermet after 30 years. He then continued working at Central Christian Church doing custodial work for 13 years. Baby Talk would become his next employer where he drove the van for their many programs. Lastly, he worked for McDonald’s as a part of the maintenance team where he was employed until his death. Charles married Roberta Colleen Allen on January 19, 1980 in Decatur, IL. At the time of his death they were married 41 years. After Charles dedicated his life to Christ in the 1980’s he began working in ministry. He would be ordained and become a pastor in August 1993 with the Church of the Living God CWFF Springfield. Over the next 20 years he would serve in many ministry leadership positions. GT Church and Riverside Baptist Church is where he attended worship and continued serving the Lord for the remainder of his life. Throughout Charles’ life he was involved in and enjoyed many things: He was the President of the Shelbyville Horseshoe Club. He served with Golden K Kiwanis where he received many awards and served as the first black President of the organization. He bought his own customized Santa suit and loved playing Santa for years. He repaired and rebuilt bikes to give to children. He loved pitching horseshoes and won many awards. Later in his life he was an avid fishermen and loved catching fish and giving them to different people. He enjoyed watching WWE with his son and grandkids. He loved cooking breakfast at GT Church. He liked watching cowboy movies. He loved spending time with his children and grandchildren. He loved his wife. And he loved his Lord and Savior Jesus Christ. Charles is survived by his wife Roberta “Robin” Wallace, children, daughter Victoria Walker of Chicago, IL, daughter Gail (Don) Plunkett of Findlay, IL, daughter Brenda (Steve) Fox of Charlotte, NC, son Charles (Theresa) Wallace Jr. of Springfield, IL, daughter Karen (Greg) Mond of Decatur, IL, son Gregory Turner of Rockford, IL, son Marty Turner of Decatur, IL, son Charles (Jill) Mitchell of Decatur, IL, daughter Christine Phillips of Decatur, IL, son Jacob (Jennifer) Wallace of Decatur, IL, daughter Kirbie (Jimmie) Wallace of Decatur, IL, 45 grandchildren, many many great grandchildren, brother Wellington Wallace Jr. of Decatur, IL, former spouse Doris Wallace of Decatur, IL, bonus son Joe Ray of Decatur, IL, special buddy Terry Bowers of Decatur, IL and a host of other family and friends. Charles was preceded in death by his daughter Lacie Marie Wallace, his parents Wellington Wallace Sr and Ruby Wallace, an infant sibling, sister-in-law Elsie Wallace, and son-in-law James Walker Sr. A celebration of Charles’ life will be held on Saturday, October 2nd, 2021 at Riverside Baptist Church 1250 W Mound Rd Decatur, IL. Visitation will begin at 10 am with celebration services following at noon. Charles’ service will be streamed live on Riverside Baptist Church’s Facebook and YouTube pages at noon.

The family of Charles Wallace Sr created this Life Tributes page to make it easy to share your memories.

Send flowers to the Wallace family.