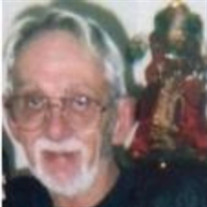 Franklin A. Moore, 88, of Decatur, IL, passed away at 2:51 A.M. on Sunday (01-09-2022) in Decatur Memorial Hospital. He was born on August 25, 1933, in Decatur, IL, the son of Floyd and Mildred (Burke) Moore. He married Carla D. Rowe on June 20, 2019 in Decatur, IL. He was a meatcutter for several years around the Decatur, IL, area. He was also a member of the V.F.W. Post #99 in Decatur, IL. He served his country in the United States Army during the Korean War. He loved the Lord and his family very much. He is survived by his wife Carla of Decatur, IL; three sons: Franklin Randy Moore, Dennis Alan Moore, Kymaireon D. Moore all of Decatur, IL.; two step-sons: Ronald A. Hill and Leon D. Neal both of Decatur, IL.; two daughters: Linda Kay Meek and husband Jack, Patricia S. Bonds all of Decatur, IL.; step-daughter Carla S. Brazier of Decatur, IL.; fourteen grandchildren including one special granddaughter Kymairea Dees and nineteen great-grandchildren. He was preceded in death by his parents, two sons, one grandson, three brothers and two sisters. Graveside services will be held at Camp Butler National Cemetery at 12:00 P.M. on Tuesday (01-25-2022). Condolences may be sent to the family at www.moranandgoebel.com

The family of Franklin A. Moore created this Life Tributes page to make it easy to share your memories.

Send flowers to the Moore family.