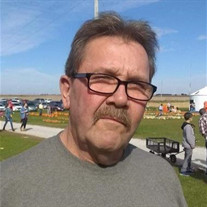 James “Jim” Eldon Shirley, 62, passed away on March 9, 2022 at his home in Decatur, IL. Jim was born to Eldon and Jane Shirley on February 3, 1960 in Chicago, IL. Jim was a jack of all trades. He fixed and built lawnmowers, cars, and motorcycles. He loved his family and his dogs. He was a kind man who loved to help people. He will be greatly missed. Jim is survived by his life partner, Londra Kerschner; daughter, Heather (Justin Logue) Kerschner; brother, Charles Shirley; sister, Linda Stewart; grandchildren, David, Caydence, Jordan, Karson, Jayden, Jordynn; nephew, Joe Gagnon; niece, Tiffany Castle; dogs, Rossco, Smoky, and Bandit. Jim is preceded in death by his parents, and son, Benjamin Kerschner. A memorial visitation will be held on Wednesday, March 16, 2022 at Moran and Goebel Funeral Home from 5:00 PM to 7:00 PM. Memorial to the family. Condolences may be sent to Jim’s family at www.moranandgoebel.com

The family of James "Jim" Eldon Shirley created this Life Tributes page to make it easy to share your memories.

Send flowers to the Shirley family.