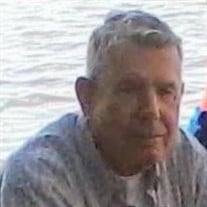 James J Madell, 84, of Decatur, IL died May 15, 2021 at his residence. He was born in Missouri, and lived in Decatur, IL since 1946. Jim was predeceased by two brothers, Thomas and John Madell. He is survived by his former wife, Joan Schmitz Madell, four daughters and their husbands: Janet (David) Andrews, Gurnee, IL, Jackie (Matt) Dunn, Carlinville, IL, Judy (Ben) Hall, Naperville, IL and Jennifer (David) Junck, St. Charles, IL, 13 grandchildren, and many nieces and nephews, as well as two siblings: Mary Olson, Decatur, and Phillip Madell, and his wife, Yukari of Topsfield, Massachusetts. Jim is a graduate of St. Patrick Grade school, and was later president of its Home and School Association. While attending St. Teresa High School, Jim was a Star Explorer in the local Explorer Scout troop. He was a life-long member of St. Patrick Church. Jim was an employee of Illinois Power for more than 40 years, starting as an accounting clerk and retiring as a construction inspector. Despite having a suffered a broken neck in an automobile accident, Jim was drafted in the US Army, where in training at Fort Sam Houston, he was named Soldier of the Month. He served as a medic in Germany and personally witnessed the building of the Berlin Wall. He travelled extensively throughout Europe before his honorable discharge after the 1961 Berlin Crisis. Jim was a skilled craftsman who could handle seemingly any project. In his spare time, he designed and single-handedly built an apartment building, drawing the blueprints, and doing the work of all the required trades. He also was especially proud of the dock he designed and constructed on his Lake Decatur property, which included two waterfalls, three pools, and two fountains, his version of the Taj Mahal. After his retirement, Jim volunteered at Habitat for Humanity, helped raise money for charitable projects, and was always available to help friends and relatives with building projects. For many years he hosted an annual family reunion and poker party, and enjoyed taking visitors on boat rides. Visitation will be from 10:00 AM - noon, Wednesday, May 19, 2021 at Moran and Goebel Funeral Home. Graveside services will be held 1:00 PM Wednesday, May 19, 2021 at Camp Butler National Cemetery. In lieu of flowers, memorials are suggested to The Sister Lucy Fund. The Moran and Goebel Funeral Home has been entrusted with the care of Jim. Condolences may be left to his family at www.moranandgoebel.com.

James J Madell, 84, of Decatur, IL died May 15, 2021 at his residence. He was born in Missouri, and lived in Decatur, IL since 1946. Jim was predeceased by two brothers, Thomas and John Madell. He is survived by his former wife, Joan Schmitz... View Obituary & Service Information

The family of James J Madell created this Life Tributes page to make it easy to share your memories.

Send flowers to the Madell family.