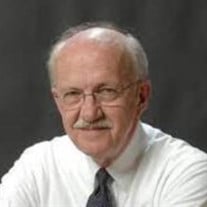 Trimmer, Joseph Lawrence, 83, died on May 5, 2022, in Robinson, IL, surrounded by family. The third son of James Day and Sarah Francis (Taylor) Trimmer, he was raised by his beloved “mom” Eunice Pearl (Taylor) Wilmot. His uncles, Charles Alvin Richards (Daddy Bud), John Thomas Holman, and Forrest Franklin Wilmot were his fathers. All precede him in death. Born October 25, 1938, in Decatur, Illinois, he was a graduate of the Decatur High School Class of 1956. He joined the U.S. Navy in June 1956, proudly serving until his honorable discharge in July 1962. He was a Gunner/Navigator in VAH-5 squadron, flying off/on several carriers, but primarily the USS Forrestal. He was awarded the Meritorious Service Medal, two Air Medals, two Good Conduct Medals, and his Air Crew Wings. He received his Bachelor’s and Master’s degrees from Millikin University, and an Advanced Certificate from Illinois. He taught mathematics and coached basketball/baseball at Lewistown, Casey, and Decatur Lakeview. After receiving his administrative certificate, he served at Decatur Mound, Jacksonville, Robinson, and Balyki as principal. He then served as Superintendent at Ford Central and Cumberland, retiring in 1997. As an educator, he received numerous awards and was recognized as a specialist in individualized education, a concept introduced in the maiden year of Nuttall Middle School in Robinson. Marrying Glendora Lillia Trueblood in 1965, they produced his most outstanding achievements – three daughters. In 1985, he married Jan Denise Tornowski, who preceded him in death. In 1997, he met the love of his life – Duchess, a miniature dachshund. For the next twelve years, they were inseparable. He then rescued his little orphan, Annie. He was an athlete – playing basketball and baseball at Millikin, semi-pro baseball, and league softball until the age of 48. He was an “honest” nine handicap golfer and a high average bowler. But above all, he was a Cardinals fan for life – often traveling with the team to major league ballparks. He was a genealogist – serving as a Past President and life member of the Decatur Genealogical Society. He traveled often, seeking out a “lost” or forgotten Trimmer. He was a storyteller – regularly published for nearly 20 years in the Decatur Herald & Review. His stories, typically included in the “Prairie Talk” column, were about Decatur history or advice from the “friendly” curmudgeon. Now, he has a new audience for his stories. He is remembered and survived by his three girls – Jayel Ann Seitzinger (Lawrenceville), Jill Trimmer Holden Farley (Lawrenceville), and Joy Leigh Trimmer (Robinson). He is also survived by two sons-inlaw – Michael David Farley (Lawrenceville) and Hank Edward York (Robinson), six grandchildren – Hannah Delaney Holden Zev (St. Louis), Ian Lane Holden (Champaign), Joseph “Jake” Logan Trimmer Seitzinger (Lawrenceville), Jack Henry Holden (Colorado), Jayde Glenn Seitzinger (Lawrenceville), and Joel Lawrence Trimmer York (Robinson), and one great-grandchild, Zoe Rylan Collins (Robinson). He is also preceded in death by his brothers, Jay Dee and John Lee, his sister, Frances June, and his first grandson, Paul “Duke” Edwin Collins III. A Visitation will be held for Joseph Thursday May 12, 2022 from 11:00a.m.- 1:00p.m. at Moran and Goebel Funeral Home. A private graveside service will be held following the visitation. Arrangements by Moran and Goebel Funeral Home 2801 Monroe St. Decatur, Il 62526. Condolences and memories may be shared at: https://www.moranandgoebel.com/

Trimmer, Joseph Lawrence, 83, died on May 5, 2022, in Robinson, IL, surrounded by family. The third son of James Day and Sarah Francis (Taylor) Trimmer, he was raised by his beloved &#8220;mom&#8221; Eunice Pearl (Taylor) Wilmot. His uncles,... View Obituary & Service Information

The family of Joseph Trimmer created this Life Tributes page to make it easy to share your memories.

Send flowers to the Trimmer family.