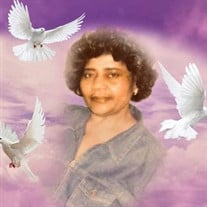 On September 14th, 2021, our beloved mother, grandmother, great-grandmother, sister, and friend transitioned into eternity, and she will be truly missed. Leana Evans-Partee was born October 15, 1950 in Starksville, Mississippi, to the late Lena B. Currie and Leonard Evans Sr. Leana was baptized at an early age in her hometown. Her family moved to Centerville, IL (East St. Louis) for a little while, then to Decatur, IL, where she resided until her passing. Leana had attended Decatur Eisenhower High School but received her GED later. During that time, enduring some of life’s hardships, Leana gave birth to four children, in which one daughter and her only son were adopted at birth but happily reunited with her in 2010 (God’s Blessing). Leana Evans eventually got married in 1974, becoming Leana Partee. She worked various jobs such as Wagner’s Casting Co., nursing homes, and Webster-Cantrell Hall. Leana’s passions were cooking and spending time with family and friends, especially on Sundays. She enjoyed playing the slot machines from time to time, but scratching $5 Crossword tickets was her favorite. Leana was a fun-loving and caring woman to everybody she met, and to know her was to love her; therefore, she will be forever in our hearts. Leana leaves to cherish her memories: daughters Andrea Evans (Decatur, IL), Frances Benton-Crawford (Memphis, TN), and Crystal Evans (Decatur, IL); son William Brent (Terrica) Hood Sr (Jackson, TN); Goddaughter Angie Cason; grandchildren Quentaria (Brandon), Tronae, James, André, Jamari, Daja, Will Jr., Omari, Zemeka (Michael), Xarius, Ke’Arius (Booka), Nacia, and Anthony; great-grandchildren Brakyia, Brylei, Zanyia, Jamyia, Kash’Mir, and Desmond; siblings Alberta (Harry) Bond (Decatur, IL), Leonard Evans Jr. (Decatur, IL), Juanette Murray (Belleville, IL), and Patricia Jackson (Cahokia, IL); a host of nieces, nephews, cousins, and friends; and special friend Rose Cook. Leana was preceded in death by her maternal and paternal parents and grandparents and one granddaughter. Visitation for Leana will be from 10am to 11am on Saturday, September 25 at Moran and Goebel Funeral Home. A funeral service celebrating Leana's life will begin at 11am at the funeral home. Burial will follow in Greenwood Cemetery. Condolences may be left for the family at www.moranandgoebel.com.

On September 14th, 2021, our beloved mother, grandmother, great-grandmother, sister, and friend transitioned into eternity, and she will be truly missed. Leana Evans-Partee was born October 15, 1950 in Starksville, Mississippi, to the late... View Obituary & Service Information

The family of Leana Evans-Partee created this Life Tributes page to make it easy to share your memories.

Send flowers to the Partee family.