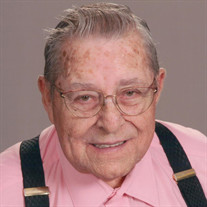 Robert Talkington, 81, of Decatur, passed away Saturday, July 24, 2021 at his home. Bob was born on December 28, 1939 in Girard, Illinois, the son of Roy and Vivan (Harbough) Talkington. After graduating from high school, he farmed with his father. He later began a long career as a truck driver. He married Carolyn Gray, and four children were born during that time. He later married Evelyn Modean and helped raise her children, loving them as his own. They were married over 30 years. She preceded him in death in November, 2011. In 2017, Bob married Myra Sepich in Decatur, Illinois. Bob was a member of Ss. James and Patrick Parish. Prior to becoming Catholic, he was very active in several different churches, serving as a deacon and as a sound technician. He loved his country and was especially proud of his brother’s service in the military. He enjoyed fishing, gardening, and animals, especially his beloved dogs Shaney and Jocko. One of his great joys was performing as a professional Santa Claus for various activities during the Christmas season. Bob is survived by his wife Myra; children Carl Dean, Kimberly Eileen (Roger), Robert Edgar Jr (Nicole), Shirley Aileen, Kathryn Modean, James Frederick, Mark Edward, Judith Ellen, Rusty Lee (James), and Terra Lynn (Steve); many grandchildren and great-grandchildren; many nieces and nephews; and a host of extended family, including Myra’s children and grandchildren. The family wishes to especially thank Christian Olson, along with Tony & Wanda Leak and Joel & Teresa Barnes, for their loving attention and care. Bob was preceded in death by his parents, wife Evelyn Modean, four brothers, and five sisters. Cremation services will be provided by Moran and Goebel Funeral Home. A Funeral Mass will be celebrated at 11:00 a.m. on Thursday, July 29 at St. Patrick Church. Visitation will be at the church beginning at 10:00 a.m. Burial will be in Girard Township Cemetery, Girard, Illinois, following the Mass. Memorials may be directed to Ss. James and Patrick Parish, organ transplant charities, or St. Jude’s. Condolences may be left for the family at www.moranandgoebel.com.

Robert Talkington, 81, of Decatur, passed away Saturday, July 24, 2021 at his home. Bob was born on December 28, 1939 in Girard, Illinois, the son of Roy and Vivan (Harbough) Talkington. After graduating from high school, he farmed with his... View Obituary & Service Information

The family of Robert Edgar Talkington created this Life Tributes page to make it easy to share your memories.

Send flowers to the Talkington family.