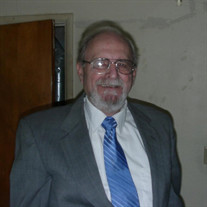 Ohio - Robert Martin (Bob) Townsend, 82, formerly of Decatur, passed away Thursday, January 20, 2022, in Ohio. Bob was born July 2, 1939, in Oconee, IL, the son of Dorothy Waddington and Robert Townsend. He attended Stephen Decatur High School, then enlisted into the Navy. After returning from the Navy, he married Carolyn Sheehan of Latham, IL. He attended Millikin University and then worked for the Decatur Sanitary District and the village of Mt. Zion, IL. Later he moved to Oklahoma and retired from Tinker Air Force Base as a sanitary district supervisor. Bob leaves behind two sons: Brian Townsend of Beavercreek, OH, and Brad Townsend (Sandra) of West Carrollton, OH; one brother Joe Townsend (Judy) of Decatur, IL. He also leaves behind six grandchildren, three great-grandchildren with a new great-grandchild due this summer, several nieces, nephews, other relatives and friends. He was preceded in death by his parents, and sister Joyce Carbone. Graveside services with burial to follow will be 11 am, Tuesday, January 25, 2022, at Boiling Springs Cemetery. The family of Robert Martin (Bob) Townsend is being served by Moran & Goebel Funeral Home and Cremation Services, 2801 N. Monroe St., Decatur, IL 62526. Condolences and memories may be shared at www.moranandgoebel.com.

The family of Robert Martin (Bob) Townsend created this Life Tributes page to make it easy to share your memories.

Send flowers to the Townsend family.